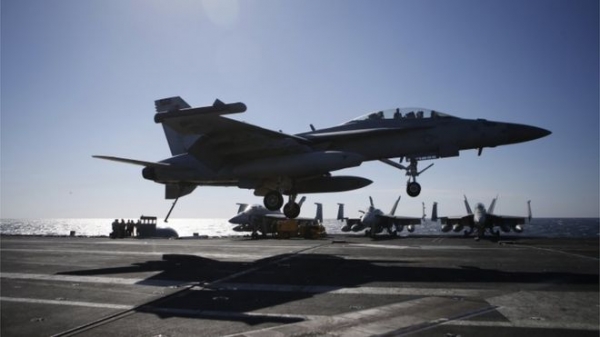 The US Navy scrambled four F/A-18 jets to intercept Russian warplanes which flew near a US aircraft carrier off the Korean peninsula, officials say.

A spokesman for the White House said the Russian planes flew close to the USS Ronald Reagan during a joint military exercise with South Korea.
Josh Earnest said the incident "did not result in significant confrontation".
US-Russia relations have deteriorated, particularly over the conflicts in eastern Ukraine and Syria.
Mr Earnest said there were "vigorous disagreements" between the two countries, but that the chill in ties did not reflect the events of the Cold War.

A US Navy official told Reuters news agency that two Russian Tu-142 Bear aircraft flew within a nautical mile of the Reagan.
The incident took place in international waters and air space in the Sea of Japan on Tuesday, according to the White House.

South Korean military aircraft first intercepted the Russian planes before the US jets escorted them from the area.
It comes days after a US Navy ship angered the Chinese government by sailing close to artificial islands built by Beijing in the disputed waters of the South China Sea.
The heads of the Chinese and US navies held talks by video-link on Thursday.
The US Navy said that Admiral John Richardson and his Chinese counterpart Admiral Wu Shengli discussed the importance of maintaining dialogue.
The patrol by the destroyer USS Lassen on Tuesday has been seen as a challenge to China's territorial claims in the Spratlys, which are opposed by other countries in the region.

More in this category: « Paul Ryan elected US House speaker Syria conflict: Obama to send special forces to fight IS »
Login to post comments
back to top