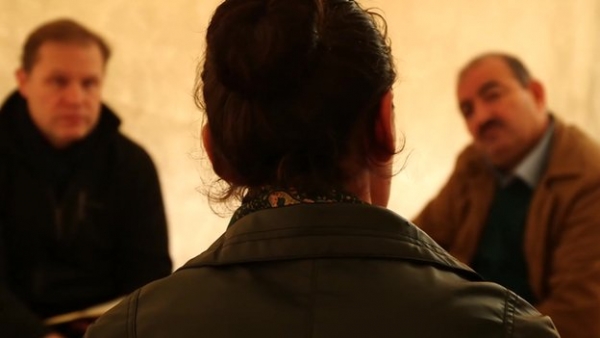 Hannan Hannan was taken away from Sinjar by force, along with other girls and women

The Yazidi religious minority community in Iraq says 3,500 of its women and girls are still being held by the so-called Islamic State (IS),

many being used as sex slaves. A few have managed to escape and here tell their harrowing stories.

One day in August, Hannan woke to find her family frantically packing. She was taken aback: she had not realised the jihadists calling themselves "the Islamic State" were so close.

Outside, the main street in her hometown of Sinjar was choked. Her family joined other Yazidis "running and crying", bullets flying overhead, she says.

Rain drums on the tent as she tells me her story, nervously twisting her fingers.

"Hannan" is not her real name. None of the former captives I spoke to could bear to be identified. Hannan is 18 and wants to be a nurse, a future almost snatched away by IS.

Hannan
Hannan was taken away from Sinjar by force, along with other girls and women
Hannan says the jihadists blocked Sinjar's roads with their pick-up trucks. She was turned back to town, where women and girls were separated from everyone else.

"There were 20 of them, with long beards and weapons. They said: 'You're coming to Mosul.' We refused. They hit us and dragged us to their cars."

She was taken with other women to a sports hall. Then, after a couple of weeks, to a wedding hall. In one place, there were 200 women and girls. These were slave markets. IS fighters could come to take their pick.

"We didn't dare look at their faces. We were so afraid. One girl came back after she had been used as a sex slave and told us everything. After that, IS did not allow anyone else to return.

"They were shooting to scare us. They took whomever they wanted, by force. We were crying the whole time. We wanted to kill ourselves but we couldn't find a way."

One girl did manage to kill herself, Hannan tells me.

"She slashed her wrists. They didn't let us help her. They put us in a room and shut the door. She died. They said: 'It doesn't matter, we'll just dump the body somewhere.'"

Window of escape
There were foreign fighters, but many local Sunnis. Hannan recognised one man. He had a mobile phone shop in Sinjar. He was the loudest in mocking the Yazidi religion.

"They said: 'Yazidis are infidels. Now you will live as Muslims.' They took many girls for sex. They told us: 'Forget the life you knew.'"

They were moved around a lot. At one point, they saw some of their menfolk, from a distance. They had been made to shave their moustaches, which the jihadists consider un-Islamic.

We asked the IS fighters: 'Why are you doing this to us?' They just hit us with sticks”

Hannan
Yazidi woman who escaped IS
"Our men were praying five times each day to try to save their families," she explains. "IS told us: 'If you do not follow Islam, we will kill all of you.'"

The younger girls were the first to be taken, she says, often sent to the IS "capital" - the Syrian city of Raqqa. Finally, it was her turn to go.

"They told us: 'We will take you to your families first. That's the last time you will see them.'

"We were crying a lot, holding hands and crying. We asked the IS fighters: 'Why are you doing this to us?' They just hit us with sticks."

They were not taken to see their families but to a house they assumed was a staging post. Seven girls were put in a room. Some were taken out to be abused and then returned. There were armed guards outside. It seemed hopeless.

But the room had a plastic window and one night they were able to force it open.

"We got out, one-by-one, from the window. I was the fifth. I was waiting outside the window for my cousin. But I saw a light coming. I couldn't wait any longer. I jumped over a wall. We ran - and kept running. We couldn't help the others."

Sold for pittance
In another tent I meet "Khama", who did end up in Raqqa. She did not escape but was eventually freed when her family paid a ransom of $3,000 (£1,920).

She is 30 years old and remembers the shock and shame of the day she was sold as a servant; she remembers, too, how much was paid.

Displaced persons camp in northern Iraq
Many Yazidis forced to flee IS attacks are now living in camps for displaced people
"They put us up for sale. Many groups of fighters came to buy. We couldn't sleep properly because new groups came at all hours," she says, almost whispering.

"Sometimes they brought girls back who had been beaten, injured. When they recovered, they were sold again. Eventually, they took all the girls. The women were left behind [and sold last].

She and her cousin were bought by a jihadist with a Western passport.

He had five other Yazidi women and girls in his house. He was already married and had his wife with him.

Nevertheless, he intended to forcibly marry two of the Yazidis, using the others, like Khama, as servants.

Khama tells me his wife was not happy with the situation but could do little about it. The man had other problems, too.

"His neighbour, a sheikh, came and told him: 'You can't keep all those girls. [IS leader Abu Bakr al-] Baghdadi's orders are one per house.'"

A guide to slavery
It seems that IS has, indeed, given out orders on the proper use of women as slaves.

The group's Department of Research and Fatwas (religious edicts) has issued a pamphlet with the chillingly matter-of-fact title: "Questions and Answers on Taking Captives and Slaves".

IS Questions and Answers pamphlet
An IS pamphlet instructs fighters about sexual activity with female captives
The document appears to be genuine. It was posted on an jihadist web forum and, apparently, given out after Friday prayers in Mosul.

Christians, Jews and Yazidi women can all be taken as slaves, it says. Women can be bought, sold, and given as gifts; they can be disposed of as property if a fighter dies.

It is a depraved and depressing document, at odds with mainstream Islam, though well-researched with Koranic verses and hadiths, or reports of what the Prophet Muhammad said or approved.

One theory is that the pamphlet was actually issued to try to restrain the more outlandish behaviour of IS fighters. It says, for instance that a man may not sleep with his wife's slave, or with another man's slave; and that a man may own two sisters but not sleep with them at the same time.

Victims mocked
The atmosphere among IS fighters was revealed by a now-notorious video which appears to show a group of young men eagerly looking forward to their turn at the slave market.

"You can sell your slave, or give her as a gift... You can do whatever you want with your share."

"Whoever wants to sell, I can buy, my brothers."

"I will pay three banknotes."

"I will buy her for a pistol."

"It costs more for one with blue eyes."

"Can one take two slave girls? Does that work?"

"Abu Fahd, your Yazidi is dead!" (Someone giggles)

'Plan of annihilation'
From the interviews we conducted in northern Iraq, it seems that if Yazidi women converted, they might expect a forced marriage. If they did not convert, they might end up being passed around a number of fighters.

"Janar", aged 20, tells me: "There was one 11-year-old girl. They beat her a lot. They gave her to one fighter and then to another one from Mosul. We heard that she killed herself later, in Mosul."

Yazidi women in silhouette
Two Yazidi sisters told how they refused to be separated
She sits cross-legged on a foam mattress on the tent floor, her 14-year-old sister next to her. Other relatives, men and women, watch anxiously. "Nine of our family are still there, three of them girls," says a brother.

Everyone is silent as Janar explains that she was able to shield her younger sister from the worst abuse, at some cost to herself.

"They tried to separate us many times when we were in Mosul," she says, "We refused, always."

Like Hannan, the young woman who wants to be a nurse, she recognised one of the IS men.

"We knew the man who came to buy us," she says. "He was an odd-job man [before the IS advance in August]. He came to our house many times. Now he is an emir [leader].

"We asked him to keep us together and he agreed. He was not as bad as the others, but still bad enough. I wish I could cut them all into pieces."

The world has forgotten our women and girls... Where is the international military operation to free them?”

"This was planned from the start," he says, "It's their strategy."

The pattern was always the same, he goes on. The women were gathered in large halls and distributed as the spoils of war.

Foreign fighters usually chose first, then the local leaders of IS.

"These [local Sunnis] are the worst. They are barbarians. They take two, three, four, five women," Mr Domle says. "The world has forgotten our women and girls. Where is the international military operation to free them?"

Mounting evidence
I was on Mount Sinjar in August when I first heard about women and girls being taken. I did not know whether to believe what was being said. It sounded like the mix of hysteria and propaganda. But since then the evidence has piled up.

A report by Amnesty International, to be published on Tuesday, has more harrowing testimony, from dozens of women.

There are occasional glimpses of humanity. A fighter's wife was "like a mother" to a captured Yazidi girl; one jihadist felt sorry for a 13-year-old girl and her toddler sister, buying them to set them free. These, though, were rare exceptions.

Map of IS areas of control
IS itself has not tried to hide what it has done. As well as the pamphlet and the video, its official publication, Daqib, records what happened:

"After capture, the Yazidi women and children were then divided according to Sharia [Islamic law] amongst the fighters of Islamic State who participated in the Sinjar operations…

"Before Satan sows doubt among the weak-minded and weak-hearted, remember that enslaving the kuffa [infidels] and taking their women as concubines is a firmly-established aspect of Sharia."

The figure of 3,500 women and girls still in captivity is not a rough estimate. A Yazidi committee has names of all the missing. Of those who have returned, some are pregnant.

The Yazidis are deeply conservative. They have faced an attempt to destroy them as a people. Even after the credible reports of mass killings and forced conversions, what happened to the women remains perhaps the most traumatic event.

So far, a total of some 400 women and girls have managed to escape. Occasionally, a woman still turns up at one of the camps in northern Iraq, terrified and exhausted, a victim of slavery in the 21st Century.

People in the camps seem stunned, quiet. They wait for those left behind, knowing there is little chance they will be rescued.

More in this category: Jihadism: Tracking a month of deadly attacks »
Login to post comments
back to top