Cigarette package law to be voted on by MPs before election 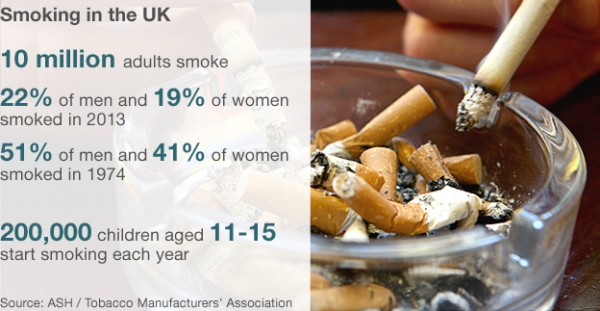 A law introducing plain cigarette packaging in England and Wales could come into force in 2016 after ministers said MPs would be asked to vote on the plan before May's general election.
It follows a series of public consultations on the issue.
Public Health Minister Jane Ellison told MPs the move was likely to have a positive impact on public health, particularly for children.
Labour has already pledged to ban images on packets if it wins power.
And doctors say the move would save thousands of lives.
BBC health editor Hugh Pym said the changes could come into force as soon as 2016 if Parliament passes legislation before the end of March.
'Not complacent'
Ms Ellison said all the evidence pointed to the step having a positive impact - although she warned of a potential legal challenge from the cigarette industry which strongly opposes the move.
"We cannot be complacent. We all know the damage smoking does to health," she said.
"This government is completely committed to protecting children from the harm that tobacco causes."
Jump media playerMedia player helpOut of media player. Press enter to return or tab to continue.
Public Health Minister Jane Ellison announced plans for a vote on plain packaging
A review of the public health implications of standardised packaging last year by Sir Cyril Chantler concluded it was very likely their introduction would lead to a modest but important reduction in the uptake and prevalence of smoking.
MPs are now expected to be given a free vote on the issue before Parliament is dissolved ahead of the general election campaign, which begins in April.
Figures on Smoking in the UK: 10 million people smoke and 200,000 children aged 11 to 15 start smoking each year
Professor Dame Sally Davies, chief medical officer for England, welcomed the move.
"We need to keep up our efforts on tobacco control and standardised packaging is an important part of that," she said.
The British Lung Foundation and other health campaigners said plain packaging would reduce the appeal of cigarettes to young people.
'Gross infringement'
Australia became the first country to ban all images and words - apart from public health warnings - from cigarette packs in December 2012.
Simon Clark, from the pro-smoking lobbying group Forest, said this had had "no discernible impact" on smoking trends in Australia. He suggested there was substantial public opposition to the move in the UK.
The Institute of Economic Affairs, a free market think tank, said it was a "gross infringement of the right of companies to use their trademarks and design their own packaging".
Examples of plain cigarette packages sold in Australia
Critics questioned the impact of the move in Australia
If passed, the legislation would apply only to England. Ms Ellison said she hoped devolved administrations in Wales, Scotland and Northern Ireland would follow suit.
The Welsh government has confirmed that the decision by MPs would also apply in Wales - the assembly voted to accept any Westminster legislation on the issue in January 2014.
A
Fixed colours
The Department of Health said the proposed design of the standardised packs had yet to be decided but released some examples of how they may look.
Cigarettes on sale
The examples are dull brown on the outside and white on the inside. Apart from health warnings, the brand or variant name will be the only text allowed.
Shadow health minister Luciana Berger said the change had been a "long time coming" and that standardised packaging would be a vital step in dealing with the "glitzy appeal" of smoking.
UKIP leader Nigel Farage tweeted: "Plain packaging is an appalling intrusion into consumer choice and the operation of the free market. Jobs and tax revenue would suffer."
Further tobacco controls are due to come into force in May 2016, when the European Tobacco Products Directive will require larger picture health warnings on packets and will ban flavourings, including menthol.
Read 870 times
Rate this item
(1 Vote)
Tweet
Published in Health

More in this category: « Exercise advice unrealistic, say experts Drugs in dirt: Scientists appeal for help »
Login to post comments
back to top