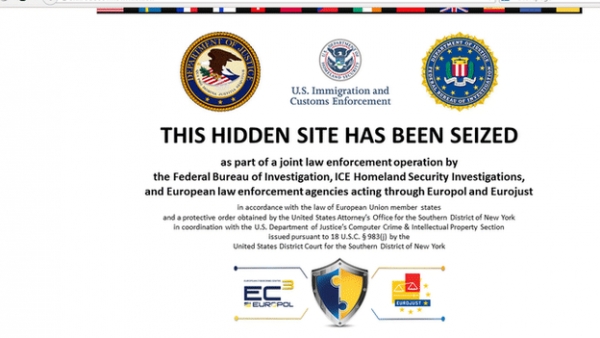 Over 400 'dark net' sites, including Silk Road 2.0, were shut down in November

A man has been arrested in Seattle for allegedly helping to run Silk Road 2.0, the anonymous online marketplace for illegal goods.

The site sprang up after the original Silk Road was closed down by the authorities in 2013.

Brian Richard Farrell is alleged to have told police that he was the "right hand man" of Silk Road 2.0 boss Defcon.

The arrest comes amid the trial of Ross Ulbricht, alleged to have run the original Silk Road.

The 26-year-old arrested in Seattle is alleged to be DoctorClu, the pseudonym for a senior administrator on the site.

He is charged with one count of conspiracy to distribute cocaine, heroin and methamphetamine.

Blake Benthall, alleged to be the site's lead administrator Defcon, was arrested in San Francisco in November.

Dread Pirate Roberts
The trial of the man alleged to have run the original Silk Road is ongoing.

The charges against Mr Ulbricht include accusations of operating a continuing criminal enterprise, conspiring to commit narcotics trafficking, money laundering and computer hacking.

He could face life in prison if found guilty on all charges.

He has denied all charges.

The defence set out to prove last week that the authorities have the wrong man in the dock, saying that Dread Pirate Roberts was in fact Mark Karpeles, the owner of the now-defunct Mt Gox Bitcoin exchange.

Karpeles has denied any connection to the Silk Road, and much of the evidence presented to the court - about the suspicions of one Department of Homeland Security special agent that Karpeles was the mastermind behind the Silk Road - has been ruled inadmissible by the judge as it was not based on "competent evidence".

More in this category: WhatsApp Plus users suspended by official app for 24 hours »
Login to post comments
back to top