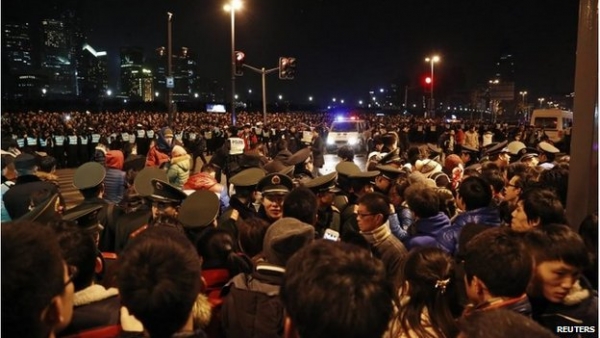 Police control crowds after the stampede on the Bund, Shanghai (1 Jan 2015) Police said more people turned out for the midnight countdown than they had expected

Four district officials have been sacked over a stampede on New Year's Eve in the Chinese city of Shanghai that left 36 people dead.

Seven more officials have been disciplined over the tragedy in the Bund district.

The crush happened in Chenyi Square on the waterfront, where huge crowds had gathered for the countdown. The victims were trampled and asphyxiated. Forty-nine other people were injured in the accident. The investigation team said local officials had failed to prevent public risk. Shanghai Vice Mayor Zhou Bo, who was part of the investigation team, said the city had sent its "deepest apologies'' to families of the victims, calling the incident "totally avoidable".

"We feel very pained, guilty and responsible for this.''
The four officials removed from their posts were the party chief of Huangpu District - which includes the Bund and riverfront area - and his deputy, plus the district's public security chief and deputy police chief.

The other officials punished were in tourism, public security and urban management, Xinhua news agency said.

"The thinking of the Huangpu District government and related department heads was paralysed, with a serious lack of understanding of guarding against public security risks," Xiong Xinguang of the investigation team told a news conference.

"Preventative and response preparation was sorely lacking, early warnings on the night were weak, and the response measures were not suitable."

A number of officials, including the district party chief and his deputy, also faced censure for using public funds to pay for a luxury meal that evening, close to where the deaths occurred, Xinhua news agency reported.

The authorities have been criticised for both their handling of the tragedy.

Media reports have been tightly controlled since the incident and relatives of the 36 victims have been under careful watch by the authorities, reports the BBC's John Sudworth in Shanghai.

There was no mention in Xiong Xinguang's news conference about the treatment of the families or the payment of compensation, our correspondent adds.