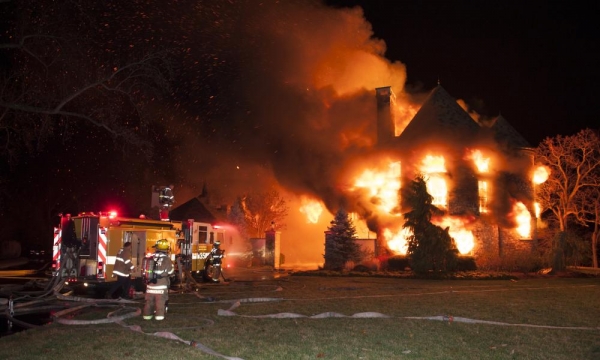 Six members of a family were unaccounted for after a fierce fire reduced a multimillion-dollar waterfront mansion near Maryland’s capital to a scorched stone framework.

Two teddy bears and flowers now rest near the front gate and teary-eyed neighbors have stopped by.

On Tuesday, federal fire investigators were expected to arrive after first light, seeking a cause for the flames that gutted the 16,000-square-foot home with seven bedrooms and seven and a half baths. The flames took hours to put out Monday after the fire began before dawn on the outskirts of Annapolis.

“We know who’s unaccounted for,” said Captain Russ Davies, a spokesman for the Anne Arundel County fire department. “If you look at the damage, you know, it would not be a stretch to think that if there were occupants that they did not survive the fire.”

He said the search for possible victims of the fire may not begin until Wednesday, partially because federal investigators were traveling to the scene from across the country.

The structure also was unstable and tens of thousands of gallons of water needed to be pumped out of the basement before the search begins, Davies said.

By Tuesday, there was no word yet on the unaccounted family members.

Davies has declined to say exactly who they were. Previously he had said the occupants might have been out of town, but he later disclosed: “After interviews with the family, it has been determined that six members of the family are not accounted for.”

The fire was initially reported about 3.30am Monday by an alarm monitoring company and a neighbor who spotted flames at the mansion near Annapolis. Davies said the cause of the fire hasn’t been determined.

Online records of the Maryland Department of Assessments and Taxation list Don and Sandra Pyle as owners of the home, which the records say is their principal residence. Don Pyle was named chief operating officer of ScienceLogic last fall. The company, based in Reston, Virginia, makes software for cloud computing.

Yama Habibzai, a spokesman for ScienceLogic, confirmed in an email to the Associated Press there was a fire at Pyle’s home early Monday and that it’s under investigation. He said the company had no further comment.

The fire was brought under control about three hours after it began. Some 85 firefighters had to be called in from several jurisdictions. Davies said because there was no fire hydrant in the area, firefighters shuttled water tankers to the site and stationed a fire boat at a pier near the property to bring in water.

Because of the intensity of the fire, the size of the house and the failure of the roof and floors, firefighters have been unable to search the structure after it was reduced to its stone framework, Davies said. He added that hot spots took another 10 hours to extinguish before operations were scaled back around nightfall. A fire engine company and police planned to remain on the site overnight.

Agents with the Bureau of Alcohol, Tobacco, Firearms and Explosives (ATF) were on the premises Monday afternoon. Special agent David Cheplak, a spokesman for the ATF’s Baltimore field office, said local fire officials sought the help.

Cheplak said there was no evidence at this point of foul play. He said the team was expected to arrive Tuesday.

According to a 2008 story in the Baltimore Sun, the Pyles’ house, which was the site of a charity event, was described as looking like a castle, with mini-turrets, stonework and lion statues.

State property records said the two-story house was built in 2005, then listed at $4.2 million.

More in this category: « Man dies after jumping from Manhattan Bridge, found with suicide note White House chief of staff: Paris unity march snub 'rests on me' »
Login to post comments
back to top