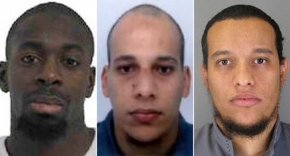 The bodies of three men suspected of carrying out the attacks in France last week, from left, Amedy Coulibaly, Chérif Kouachi and Saïd Kouachi, are thought to be in a police morgue

PARIS — As France continued to reel from one of the bloodiest terrorist attacks in recent memory, the authorities were grappling with the question of what to do with the bodies of the three gunmen.

The three men — Amedy Coulibaly, Chérif Kouachi and his brother Saïd Kouachi — were killed in two separate standoffs last Friday. Their bodies are thought to be in a police morgue in Paris, and the Paris prosecutor, who is in charge of the counterterrorism investigation, has not made any official request to bury them. Nor have the families of the gunmen — some who have condemned their actions — made public how they want to handle the burials.

The issue raises a difficult question for the French state, which in the past has offered a Muslim burial even to those who committed terrorist acts. Under French law, if handling of the body is not specified in a will, families who have lost relatives are expected to make an official request for burial to the mayor of the city where they lived or died. They can also have them buried at a family plot in a graveyard, or on their ancestral land.

Mohamed Merah, a Frenchman with Algerian roots who killed seven people in 2012 in southern France, including three children and a rabbi at a Jewish school in Toulouse, was buried anonymously in a Muslim plot in Cornebarrieu, near Toulouse, where he lived, but only after that city’s mayor voiced opposition and efforts to bury him in Algeria were unsuccessful.

The United States has faced similar issues, including after the bombing at the Boston Marathon in April 2013. The body of one of the suspects, Tamerlan Tsarnaev, who was killed as he tried to escape the police, remained at a funeral home for six days because no community could be found that would accept it. He was eventually buried at a small Muslim cemetery in Virginia.

After Osama bin Laden was killed in 2011 by American Special Forces in Pakistan, he was given Muslim burial rites, United States officials said at the time, before he was buried at sea off an aircraft carrier in the North Arabian Sea to prevent his grave from becoming a shrine to his followers.
Nevertheless, with tensions high in France after an attack that shocked the nation, several French mayors have already made it clear that they will refuse to let terrorists be buried in their cities, fearing that the graves could become places of pilgrimage for other extremists or spur a violent backlash.

“If I’m asked to bury Saïd Kouachi, I will refuse categorically,” said Arnaud Robinet, the mayor of Reims, the city in northeastern France where Mr. Kouachi, the elder of the two brothers, had settled several years ago. “I don’t want a grave in Reims to become a place of prayer and contemplation for some fanatics.”

Mr. Robinet said that he had not received any formal request from the government to bury Mr. Kouachi in Reims, where he lived with his wife and their 2-year-old son, but that he had heard that an undertaker had been contacted about a possible burial.
Cemeteries are “a place of peace,” Mr. Robinet added. “I don’t want them to become a place of hatred.”

The Kouachi brothers, who killed 12 people in an attack on the satirical weekly Charlie Hebdo, are orphans of Algerian descent, and are not believed to have a family burial plot; Mr. Coulibaly, who killed four people at a kosher supermarket and a police officer a day earlier, has origins in Mali, and was living in Fontenay-aux-Roses, south of Paris, before the attack.

But other officials said French law had to be upheld, even if the person being buried had committed an atrocity. An official at the city hall in Gennevilliers, the suburb of Paris where Chérif Kouachi lived, said that the city would bury Mr. Kouachi because he “has the right to be buried here.”

“If his family gets in contact with us, we will respect French law,” said the official, who spoke on the condition of anonymity because she was not authorized to speak publicly about the issue.

An official in the northern city of Dammartin-en-Goële, where the Kouachi brothers were killed after seizing a printing plant following the attack on Charlie Hebdo, said, “We have nothing to declare on this subject.” But in an earlier report, the newspaper Le Figaro quoted a figure in the mayor’s office as saying that city officials would rather “avoid” having the Kouachi brothers’ graves in their cemetery.
Legal experts say there are alternatives for mayors who fear that burying a terrorist in their cities could bring trouble. Jean-Luc Bringuier, a legal expert who specializes in funeral law, said in an interview with BFMTV that a mayor could make the grave anonymous or refuse to have words written on the headstone

In 2012, after Mr. Merah was killed by security forces after an extended standoff, Pierre Cohen, the mayor of Toulouse, where Mr. Merah lived at the time, said in a statement that holding a funeral in the city was “not appropriate” given his actions.

The Algerian authorities also refused to bury Mr. Merah in the village of Sidi Slimane, where his family came from. Eventually, Mr. Merah was buried in an anonymous grave in Cornebarrieu. Le Figaro reported at the time that his mother, Zoulhika Aziri, had not attended his funeral, nor had she been seen praying at his grave. But flowers had been placed on Mr. Merah’s grave, the newspaper said, and numerous people had come to pray there.

Abdallah Zekri of the French Council of the Muslim Faith said he organized Mr. Merah’s funeral at the request of his family. “I buried him in an isolated corner, alone, and it didn’t become a place of pilgrimage,” Mr. Zekri said.

Mr. Zekri said he wanted the funerals for the Kouachi brothers and Mr. Coulibaly to be equally discreet.

“I want French authorities to bury these men in the most complete silence,” he said. “I want them to be buried fast, and without any propaganda.”

France has relatively few burial plots designated for Muslims, and such plots are often unavailable. Muslim groups say that because of this, some Muslims prefer to send their relatives’ bodies back to their countries of origin, or try to find space in a nearby cemetery.

Mr. Bringuier, the legal expert, said that in the end, the terrorists were French citizens, and that the authorities had a duty to find them a burial place.

“There is a right to be buried for every person who dies,” he said.

More in this category: « French Rein In Speech Backing Acts of Terror Germany Arrests 2 in Terrorism Investigation as Europe Braces for Potential Attacks »
Login to post comments
back to top