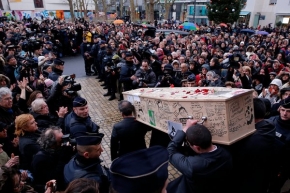 The funeral in Montreuil for Bernard Verlhac, a cartoonist who died in the attack on Charlie Hebdo.

PARIS — The French authorities are moving aggressively to rein in speech supporting terrorism, employing a new law to mete out tough prison sentences in a crackdown that is

stoking a free-speech debate after last week’s attacks in Paris.

Those swept up under the new law include a 28-year-old man of French-Tunisian background who was sentenced to six months in prison after he was found guilty of shouting support for the attackers as he passed a police station in Bourgoin-Jalieu on Sunday. A 34-year-old man who on Saturday hit a car while drunk, injured the other driver and subsequently praised the acts of the gunmen when the police detained him was sentenced Monday to four years in prison.
All told, up to 100 people are under investigation for making or posting comments that support or try to justify terrorism, according to Cédric Cabut, a prosecutor in Bourgoin-Jalieu, in the east of France. The French news media have reported about cases in Paris, Toulouse, Nice, Strasbourg, Orléans and elsewhere in France.
The arrests have raised questions about a double standard for free speech here, with one set of rules for the cartoonists who freely skewered religions of all kinds, even when Muslims, Catholics and others objected, and yet were defended for their right to do so, and another set for the statements by Muslim supporters of the gunmen, which have led to their prosecution.

But French law does prohibit speech that might invoke or support violence. And prosecutors, who on Wednesday were urged by the Ministry of Justice to fight and prosecute “words or acts of hatred” with “utmost vigor,” are relying particularly on new tools under a law adopted in November to battle the threat of jihadism. The law includes prison sentences up to seven years for backing terrorism.

Some of those who were cited under the new law have already been sentenced, with the criminal justice system greatly accelerated, moving from accusations to trial and imprisonment in as little as three days.

Prosecutors seized on the law in the days after the terrorist attacks in Paris, which left 17 people dead — 12 at the offices of Charlie Hebdo, a weekly newspaper that was targeted in retaliation for publishing cartoons of the Prophet Muhammad. A notice from the Ministry of Justice on Jan. 12 directed prosecutors to react firmly.

The accused did not have to threaten actual violence to run afoul of the law. According to Mr. Cabut, who brought the case in Bourgoin-Jalieu, the man shouted, “They killed Charlie and I had a good laugh. In the past they killed Bin Laden, Saddam Hussein, Mohammed Merah and many brothers. If I didn’t have a father or mother, I would train in Syria.”

The most prominent case now pending in the French courts is that of Dieudonné M’bala M’bala, a provocative humorist who has been a longtime symbol in France of the battle between free speech and public safety. With nearly 40 previous arrests on suspicion of violating antihate laws, for statements usually directed at Jews, he was again arrested on Wednesday, this time for condoning terrorism.

He faces trial in early February in connection with a Facebook message he posted, declaring, “Tonight, as far as I’m concerned, I feel like Charlie Coulibaly.” It was a reference to the popular slogan of solidarity for the murdered Charlie Hebdo cartoonists — “Je suis Charlie” — and one of the attackers, Amedy Coulibaly, who killed a policewoman and later four people in a kosher supermarket last Friday. 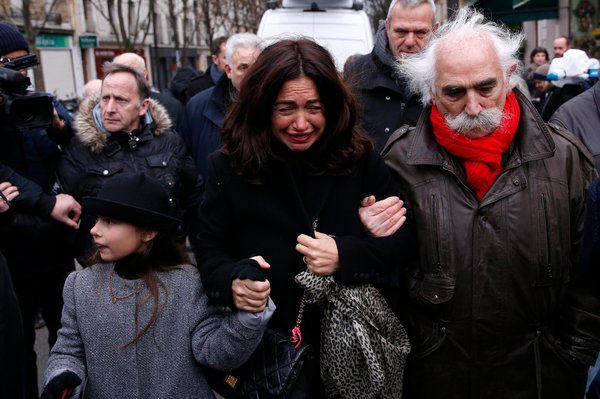 Elsa Wolinski, center, the daughter of another victim, Georges Wolinski.

Prosecutors and other lawyers say the difference is laid out in French law, which unlike United States laws, limits what can be said or done in specific categories. Because of its World War II history, for example, France has speech laws that specifically address anti-Semitism and Holocaust denial. In the case of the Charlie Hebdo cartoonists, prosecutors said, the targets were ideas and concepts, and though deemed extreme by some, the satire was meted out broadly.

President François Hollande of France and Chancellor Angela Merkel of Germany on Thursday both sought to quash any backlash against Muslims in the wake of the Islamic militants’ attacks. As they have also done in recent days, they raised the issue of anti-Semitism.

“We must be clear between ourselves, lucid,” Mr. Hollande told an audience at the Institute of the Arab World in Paris. He said that inequalities and conflicts that had persisted for years had fueled radical Islam.

“The Muslims are the first victims of fanaticism, extremism and intolerance,” he said.

“French Muslims have the same rights, the same duties as all citizens,” Mr. Hollande said.

Pope Francis joined the debate while traveling to the Philippines from Sri Lanka, saying that while he defended freedom of expression, there were also limits.

More in this category: Bodies of French Gunmen Lie Unburied, and, It Appears, Mostly Unwanted »
Login to post comments
back to top