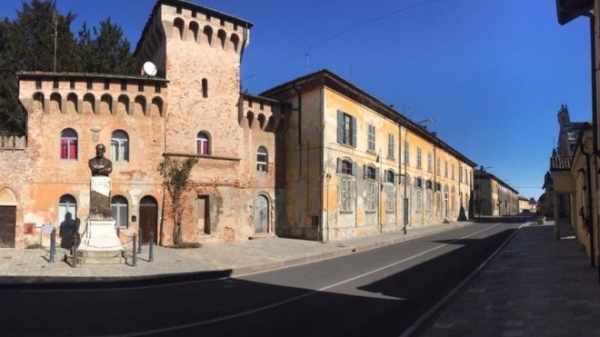 This is the village of San Fiorano in northern Italy's Lombardy region, one of the areas worst affected by coronavirus.

Italy has 400 cases of coronavirus and 12 people have died there since the outbreak began.

Eleven towns and villages in Lombardy, the region around Milan, and Veneto, which includes Venice, are in a quarantined red zone, home to a total of 55,000 people.

They have been told not to leave for two weeks as Italian authorities try to contain the spread of the virus.

Daniela Marchiotti, a writer and translator, lives in San Fiorano with husband Daniele and daughter Emma.

It's been seven days since the family were told not to leave the red zone. Here, Daniela tells the BBC what life is like in a quarantined village.

"It all feels surreal.

"Last week when the news first came out there was some initial anxiety as the information was worrying and confusing.

"There were long queues to buy supplies and the shops were only allowing people inside in small groups. People were buying bleach and disinfectant which quickly went out of stock.

"It was also compulsory to wear a mask. If you weren't wearing one you would be sent home.

"On Tuesday, it was carnival here but all events were cancelled. But my husband wore a wig and headed out to buy supplies.

"He wanted to give people a reason to laugh and keep their spirits up.

"But now things are less strict. Since yesterday the authorities have confirmed masks are no longer necessary inside supermarkets as long as people limit their movements, but many are wearing them nevertheless.

"Then there are the patrols, both the police and the army are at the borders of the red zone, which we are allowed to move within but not out of.

"Life has certainly taken an unexpected turn but people here are very resourceful.

Coronavirus cases surge to 400 in Italy
Live updates
"Volunteers are bringing food and medicines to the sick or the old who cannot leave their homes, and a few newsagents have opened so that older people can buy newspapers and keep up-to-date with the latest advice.

"Apart from the initial fears, it's all very calm and quiet. There is no panic.

"Sometimes we go out for short walks, to stop ourselves from going crazy confined inside.

"At least we can take advantage of this glorious weather but as you can see, there is almost nobody around.

"Just the odd dog walker or someone running an errand while wearing a face mask.

"Other times I pass the hours reading with my daughter.

"I am lucky that I can work from home but many can't and have been forced to stay home because their places of work are shut.

"Those of us with children try to keep them busy and calm and we are waiting for the schools to start some online activities.

"It's starting to sink in now that we are trying to enter a new routine.

"But people are coming out with the most wonderful ideas to keep in touch, keep the children active and motivate one another.

"In general, there is a sense of togetherness that I will never forget."

More in this category: « Coronavirus in Europe: epidemic or 'infodemic'?
Login to post comments
back to top