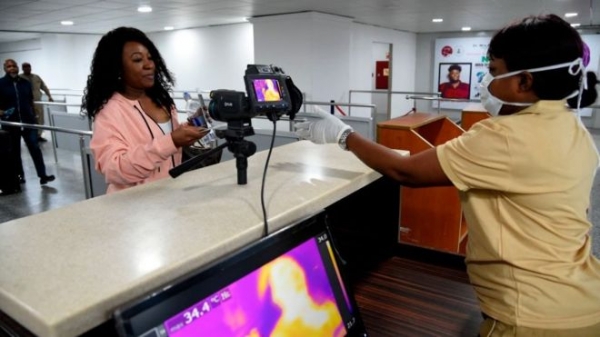 The first case of the coronavirus in sub-Saharan Africa has been confirmed in Nigeria.

The patient is an Italian citizen who works in Nigeria and flew into the commercial city of Lagos from Milan on 25 February.

Authorities say he is stable with no serious symptoms and is being treated at a hospital in the city.

Elsewhere on the continent, Algeria and Egypt have also confirmed cases of the disease.

The World Health Organization (WHO) had warned that Africa's "fragile health systems" meant the threat posed by the virus was "considerable".

Meanwhile, South Africa's health ministry has announced that two nationals aboard a cruise ship docked in Japan have tested positive for the virus.

In Kenya, the High Court has ordered the temporary suspension of flights from China following a petition by the Law Society of Kenya.

It comes amidst public outrage after China's Southern Airlines resumed flights to Nairobi amid concern about the spread of coronavirus.

Globally, more than 80,000 people in nearly 50 countries have been infected. Nearly 2,800 have died, the vast majority in China's Hubei province.

What is happening in Nigeria?
Nigerian authorities say the Italian patient - who had flown in from Milan, a city badly hit by the coronavirus outbreak - is clinically stable, with no serious symptoms, and is being managed at the Infectious Disease Hospital in Yaba, Lagos.

"We have already started working to identify all the contacts of the patient, since he entered Nigeria," the Nigeria Centre for Disease Control said in a statement.

Nigeria has been preparing to deal with the outbreak since it was first reported in Wuhan in China's Hubei province in January, it added.

Health authorities in Nigeria advise people to regularly and thoroughly wash their hands with soap and water, and use alcohol-based hand sanitisers, to avoid contracting the virus.

People have also been told to stay home if they have persistent coughs and sneezes, and contact authorities if they have any concerns.

Nigeria was widely praised for its efforts to contain the Ebola outbreak in 2014 which killed more than 11,000 people in West Africa.

The coronavirus outbreak has reached a "decisive point" and has "pandemic potential", WHO head Dr Tedros Ghebreyesus said on Thursday.

He urged governments to act swiftly and aggressively to contain the virus.

"We are actually in a very delicate situation in which the outbreak can go in any direction based on how we handle it," he said.

"This is not a time for fear. This is a time for taking action to prevent infection and save lives now," he added.

What is happening in South Africa?
The country's health ministry has announced that two nationals - working for the Diamond Princess cruise ship docked in Yokohama, Japan - have contracted the coronavirus.

It quoted Japanese officials as saying the two patients were not outwardly displaying symptoms of the virus but were receiving treatment.

The cruise liner was carrying 3,700 people when it was quarantined on 5 February, but more than 600 have since been allowed to leave after being cleared.

Meanwhile, President Cyril Ramaphosa has ordered the repatriation of some 132 citizens living in Wuhan.

No timeframe for the repatriation was given but the government said the 132 citizens - out of a total of 199 South Africans living there - had put in requests to be returned home.

None has been diagnosed with the virus or exhibited any symptoms of the disease, but they will be quarantined for 21 days upon arrival in South Africa as a "precautionary measure", the president's office announced in a statement.

What's behind the outrage in Kenya?
The arrival of a Southern Airlines flight from China's Guangzhou city in Kenya's capital, Nairobi, on Wednesday sparked public anger.

Many criticised the government for allowing the 239 passengers into the country amid concern of the spread of the coronavirus.

The passengers were screened and cleared and also told to self-quarantine for 14 days, Kenyan authorities say. The Chinese embassy in Kenya also said it was working with Kenyan health officials to monitor all the passengers.

But the assurances have done little to assuage the anger and anxiety of many Kenyans worried about the spread of the virus and the country's ability to contain it.

One of the local papers labelled some of the government ministers "enemies of the people":

A judge has now ordered the temporary suspension of flights from China after the Kenya Law Society petitioned the High Court.

The Chinese embassy in Kenya has, however, said the debate about the outbreak should be "rational and scientific"; it also warned against "irresponsible and even racist remarks" targeting its citizens, after a Kenyan MP suggested that locals should avoid Chinese people.