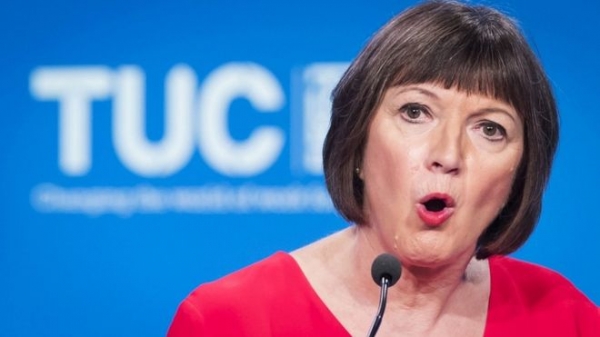 The head of the UK's unions has warned Boris Johnson she will "get to hear" what goes on in post-Brexit trade talks with the EU, even if the prime minister tries to withhold details from her.

TUC general secretary Frances O'Grady said European leaders were open with their unions, who passed information on and kept her "well plugged in".

She urged the PM to defend workers and not make EU talks a "virility test".

Downing Street promised it would not "weaken" employee protections.

A spokesperson said the government wanted to make the UK "the best place in the world to work" and would maintain "exceptionally high standards".

UK prepared to ditch trade talks in June
Brexit trade: What do the UK and EU want?
The UK left the EU on 31 January and has given itself until 31 December to reach a trade deal, during which time most EU rules will continue to apply.

Ahead of talks starting on Monday, the government has said it will not undercut existing workers' rights.

In its pre-negotiation statement it called for both sides to make a commitment "not to weaken or reduce the level of protection afforded by labour laws and standards".

But the UK is demanding the right to diverge from future EU rules, which is set to be a major point of contention in the talks.

Speaking at the TUC's headquarters in London's West End, Ms O'Grady - a Remain campaigner in the 2016 referendum - said she had "real concerns" over Mr Johnson's stance.

"I've asked for a meeting with the prime minister," she said. "We're still waiting to hear."

But the TUC is part of the European Trade Union Confederation, which represents equivalent bodies throughout the EU.

"Very often our sister unions find that their governments tell them much more about what's happening in negotiations on trade with the UK than our government tells us," said Ms O'Grady.

"That gives us a unique perspective, a helicopter view of what's actually going on and ways to take the PR spin out of the substance. We're quite well plugged in."

Ms O'Grady, who became the TUC's first female general secretary in 2013, said she wanted to play a "constructive role" in EU-UK negotiations, adding: "The government needs to wise up and understand that, if there's transparency happening elsewhere, then we'll get to hear about it. So how much better if that was shared with us direct?

"But there's a lot of macho posturing, a lot of hot air and virility-testing going on at the moment. It's a very old-fashioned view of negotiation."

The Conservatives took seats from Labour across its traditional strongholds in the Midlands and North-East of England at December's general election, with a promise to "get Brexit done".

"The PM is on probation," MS O'Grady said. "He acknowledges that those votes have been loaned and that they've got to deliver some early wins [for workers].

Although the TUC is not officially aligned to any political party, 12 of its 48 member unions are affiliated to Labour and the biggest, Unite and Unison, are the party's main donors.

Labour has lost four general elections in a row, and Ms O'Grady has a stern message for the three contenders to replace Jeremy Corbyn as leader: Rebecca Long-Bailey, Lisa Nandy and Sir Keir Starmer.

"I want a leader who has the hunger to win power," she said. "They need to figure out what's most important and what will make the most difference to people's lives."

With Labour weakened in Parliament, Ms O'Grady sees unions as more important in holding the government to account.

"I don't think anybody can ignore the fact that we're still nearly six million members strong," she said.

The number of trade union members, according to government statistics, has roughly halved since the end of the 1970s, when the unions were at the height of their power.

Changes to the law since then have made organising industrial action and picketing more difficult.

Ms O'Grady said hundreds of thousands of non-unionised UK workers currently faced "19th-Century" conditions, having to "hang around" for casual work or operating on zero-hours contracts.

The government is warning that the trade talks with Brussels could end as soon as June unless the "broad outline" of a deal is reached by then, including on employment rights.

A Downing Street spokesperson said the government was bringing forward the "largest upgrade to workers' rights in a generation " in its Employment Bill.

They added that, while not aligned to EU rules, the government would continue "to lead the way" by building on existing employment law with measures that "protect those in low-paid work and the gig economy".

Ms O'Grady said she would continue to lobby Mr Johnson for a meeting.

"We need a deal [with the EU] that protects people's jobs, rights and public services. A wise prime minister would make sure [the TUC is] at the table. My door's always open."

More in this category: « Post-Brexit talks: UK prepared to walk away in June if no progress
Login to post comments
back to top