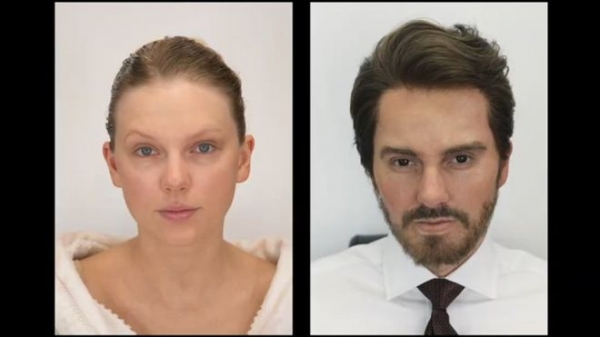 Taylor Swift plays a man-spreading, cigar smoking, strip-club-going male business executive in the new video for her track, The Man.

The song, taken from her seventh studio album Lover, is the first new music released since her

The credits show how the video was directed, produced and owned by Swift.

Mid-way through the video, the lead character, in heavy prosthetics, stops to relieve himself against an underground wall, bearing the name of all six of Swift's albums owned by Big Machine.

There's also a no scooters sign visible, alongside one saying "Missing. If found return to Taylor Swift".

Last summer Swift accused music mogul Braun of "bullying" and attempting to "dismantle" her "musical legacy" after he bought most of the US pop star's life's work, thanks to his acquisition of her former record label Big Machine for $300m (£237m).

In November she claimed Braun and Big Machine founder Scott Borchetta had prevented her from performing a medley of her old hits at the American Music Awards.

Big Machine denied the claims and the performance went ahead as originally planned.

Braun pleaded with her to stop her public campaign against him, saying he had received death threats.

The singer made a subtle nod to their spat while performing at the AMAs, where she won six awards including artist of the decade.

She took to the stage wearing a prison-style white shirt stencilled with the names of the albums in question, while performing new and old songs.

While receiving another artist of the decade award at the Billboard Awards, Swift called out Braun directly, saying her treatment had been "the definition of the toxic male privilege".

The Man in the video bears more than a passing resemblance to Leonardo DiCaprio's character in The Wolf of Wall Street, as he's congratulated for his business and sporting achievements and being the "greatest dad in the world", all while getting up to no good.

It's a thinly-veiled attack on the disparity between how men and women in the same roles are viewed by society.

At the end of the video, the director, real-life Taylor Swift, asks her male counterpart - voiced by Dwayne "The Rock" Johnson - if he could do it all again but this time "sexier".

Swift will be seen later this year headlining Glastonbury for the Worthy Farm event's 40th anniversary in June.

More in this category: « Plácido Domingo apologises to women who accused him of sexual harassment Paris Fashion Week: Facemasks on show amid coronavirus concern »
Login to post comments
back to top