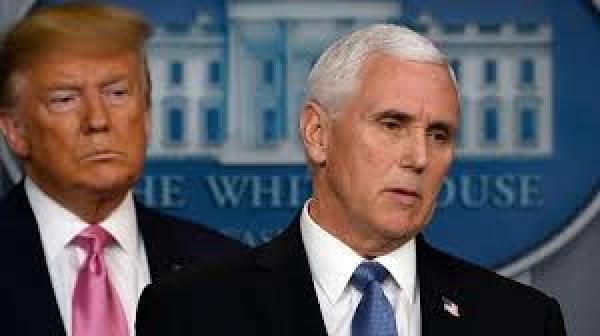 President Donald Trump has appointed Vice-President Mike Pence to co-ordinate the US government's response to the coronavirus outbreak.

Both men told a White House news conference that the risk to the American people remained very low.

The announcement came as new cases of the infection caused by the coronavirus which originated in China spread at a rapid pace around the world.

The 60th case in the US is also the first to occur on US soil.

The unidentified person in California had "no relevant travel history or exposure to another known patient" with the virus, said the Centers for Disease Control (CDC).

Addressing the press, Mr Trump expressed confidence that the US would be able to handle coronavirus.

However, Anthony Fauci, Director of the National Institute of Allergy and Infectious Diseases, said he did not expect a vaccine to be ready for a year to a year-and-a-half at the earliest.

The news conference came as Mr Trump was criticised for earlier suggesting in a tweet that the media had fanned unnecessary alarm over coronavirus "to make the Caronavirus [sic] look as bad as possible".

"USA in great shape!" he tweeted.

However, he admitted at his news conference that the US should prepare in case the virus spread. "Every aspect of our society should be prepared," he said.

He contradicted public health officials who earlier warned that spread of the virus to the US was a matter of when, not if. "I don't think it is inevitable," Mr Trump told reporters.

He credited decisions to limit certain flights into the US with containing the number of infections.

More US cases are to be expected, Mr Azar said.

More in this category: « Health officials: Coronavirus spread to the US 'inevitable' Five dead in Milwaukee shooting at Molson Coors beer company »
Login to post comments
back to top