Post-Brexit talks: UK prepared to walk away in June if no progress 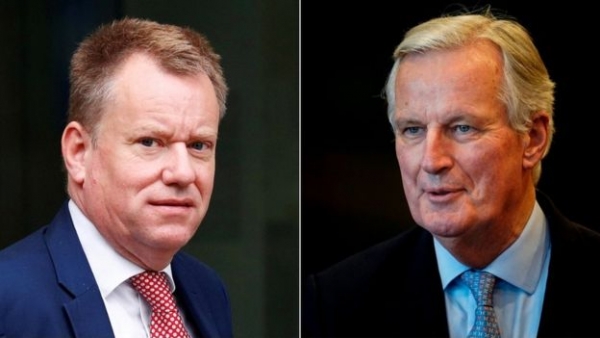 The UK has warned the EU it will walk away from trade talks in June unless there is a "broad outline" of a deal.

But the government would not accept any alignment with EU laws as the EU is demanding, with Mr Gove adding: "We will not trade away our sovereignty."

The EU has already set out its priorities ahead of the formal start of the talks on Monday.

The government has published a 30-page document outlining its priorities for the talks.

The UK "will not negotiate any arrangements in which the UK does not have control of its own laws and political life"
The UK's aim is for a trading relationship with the EU similar to the ones the 27-nation bloc has with Canada, Japan and South Korea
There will be no jurisdiction for EU law or the European Court of Justice in the UK
The UK will rely on World Trade Organisation rules under an arrangement with the EU similar to Australia's if progress on a comprehensive deal cannot be made
A separate agreement on fisheries is needed, to reflect the fact that "the UK will be an independent coastal state at the end of 2020".
The EU's 46-page negotiating document, published on Monday, indicated that the UK could be expected to keep aligned with changes to EU rules covering state subsidies for industry, environmental standards and workers' rights in future.

But Prime Minister Boris Johnson told BBC News: "The whole objective of doing what we're doing is so the UK can do things differently and better."

He added: "All we want is mutual recognition of each other's high standards and access to each other's markets.

"We wouldn't ask the EU to follow every particular in UK legislation so it doesn't make any sense for them to make the same requirement of us and that's that's where we are."

The EU's chief negotiator Michel Barnier has said Brussels is prepared to give the UK "super-preferential access" to the EU market of 450 million people.

But he said the UK has to accept alignment with EU rules as they develop to ensure fair competition with EU states, effectively ruling out a Canada-style deal.

"The UK says that it wants Canada. But the problem with that is that the UK is not Canada," Mr Barnier told an event at the European Parliament on Wednesday.

"This is because of Britain's proximity to the EU and the much larger trade volumes it has with the EU than with Canada."

Michael Gove, the minister in charge of delivering Brexit, hit back in his statement to MPs, saying: "Geography is no reason to undermine democracy.

"We will not be seeking to dynamically align with EU rules on EU terms governed by EU laws and EU institutions."

The UK officially left the EU at the end of January, but is continuing to abide by many EU rules while talks on a permanent trading relationship take place.

Mr Johnson has pledged to get a deal with the EU by the end of the so-called transition period - 31 December 2020 - and has said he is not prepared to extend that deadline.

The government wants to agree a "broad outline" of a deal with the EU "capable of being rapidly finalised by September" in the next four months.

If that "does not seem to be the case" by an EU summit in June "the government will need to decide whether the UK's attention should move away from negotiations and focus solely on continuing domestic preparations to exit the transition period in an orderly fashion", the negotiating document says.

Critics say leaving without an agreement and going to World Trade Organisation rules - the terms countries use to set tariffs (taxes) on goods when they do not have free-trade deals - could damage the economy.

He told MPs the government had a "cavalier disregard" for the consequences of failing to conclude a deal in the next 10 months and the uncertainty that would mean for business.

The Scottish National Party's Pete Wishart said: "This is nothing other than a routemap to the cherished no-deal - the real ambition of these Brexit zealots."