Coronavirus in Europe: epidemic or 'infodemic'? 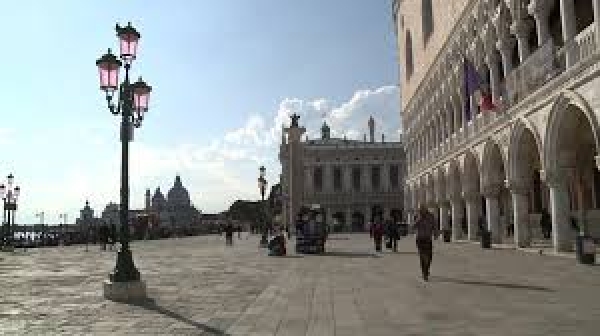 France must prepare for a coronavirus epidemic, President Emmanuel Macron says, but Italy - the worst-affected country in Europe - says misleading news is creating an "infodemic".

Mr Macron is due to discuss the crisis with Italian Prime Minister Giuseppe Conte in Naples.

In Italy 528 people are infected and 14 have died, officials say, amid global efforts to stop the virus spreading.

Italy registered a 25% surge in coronavirus cases in 24 hours, and the infections remain centred on outbreaks in two northern regions - Lombardy and Veneto. But a few cases have turned up now in southern Italy too.

Italy's Foreign Minister Luigi Di Maio told reporters that an "infodemic" of misleading news abroad was damaging Italy's economy and reputation. He said all the infections in Italy could be traced back to the two outbreaks in the north.

Lombardy governor Attilio Fontana put himself into self-isolation after a member of his team tested positive. On Facebook he said he and the rest of his team had tested negative so far, but would remain in quarantine for 14 days.

Italy's tourism association Assoturismo says March accommodation bookings are down by at least €200m (£170m; $219m) because of the virus.

On Wednesday the World Health Organization (WHO) said that for the first time the virus was spreading faster outside China, where it originated.

Globally, more than 80,000 people in about 40 countries have been infected with the new coronavirus, which emerged in December. The vast majority remain in China.

Covid-19, the respiratory disease caused by the virus, has killed more than 2,700 people so far.

On a surprise hospital visit on Thursday President Macron warned: "We are facing a crisis, an epidemic, that is coming."

He was at La Pitié-Salpêtrière hospital in Paris, where a 60-year-old man carrying the new coronavirus died on Tuesday. There has been one other fatality in France - a Chinese tourist.

In Spain, a sudden rise in infections has triggered concern, but not panic, the BBC's Guy Hedgecoe reports.

A man in Seville got infected without having travelled abroad recently, suggesting that the virus has been present in Spain longer than thought.

In Tenerife, in the Canary Islands, a hotel with nearly 1,000 guests in it remains in quarantine. There are fears that Easter Week holiday events in Spain will be affected by coronavirus.

The first coronavirus cases have been announced in Denmark, Estonia and Romania
Romanian President Klaus Iohannis has urged Romanians not to panic, amid reports of anxious shoppers emptying supermarket shelves and some intimidation of Asian people
Two more patients have tested positive in England, bringing the number of UK cases to 15
Honved Budapest, a Hungarian football team, has temporarily suspended its Italian coach Giuseppe Sannino and his assistant Alessandro Recenti, fearing they might have had contact with Italian virus carriers
In recent days Austria, Croatia, Greece, Norway, Switzerland, Georgia and North Macedonia reported their first cases, many of them people who had been to Italy
What is the situation in Italy?
Schools, universities and cinemas have been closed and several public events cancelled. There are currently no more performances at Milan's famous opera house La Scala.

Eleven towns at the centre of the outbreak - home to a total of 55,000 people - have been quarantined.

There are fears that the outbreak may tip Italy into economic recession. The BBC's Mark Lowen in Milan says fear is the reason for the city's empty cafes and many hotel cancellations. But the Milan authorities have put out a slick video on social media to woo people back to the city.

EU Health Commissioner Stella Kyriakides told reporters after meeting the Italian health minister in Rome: "This is a situation of concern, but we must not give in to panic."

The focus of the coronavirus outbreak is shifting - from China to the rest of the world, particularly Europe.

On the face of it, this seems like bad news. But there are positives too. China appears to be getting on top of the virus with the number of new cases each day reducing.

This suggests that efforts to contain the virus by telling people to stay at home, stopping large public gatherings and preventing travel are working.

The message from WHO officials is that containment is still possible and a global pandemic is not inevitable.

This view has been echoed in the UK, where the government has warned of the social and economic costs of overreacting.

More in this category: « Coronavirus: Outbreak spreads in Europe from Italy Coronavirus: Quarantined inside Italy's red zone »
Login to post comments
back to top