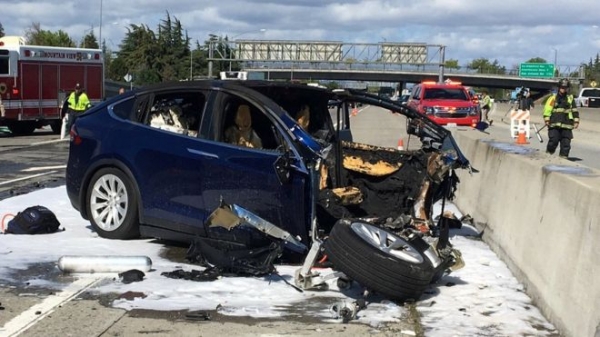 An Apple employee who died after his Tesla car hit a concrete barrier was playing a video game at the time of the crash, investigators believe.

Tesla instructs drivers to keep their hands on the wheel in Autopilot mode.

But the NTSB said more crashes were foreseeable if Tesla did not implement changes to its Autopilot system.

The authority has published the results of a two-year investigation, following the crash in March 2018.

Tesla's Autopilot software steered the vehicle into the triangular "gore area" at a motorway intersection, and accelerated into a concrete barrier.

The front of the Tesla separated from the rear, causing two other drivers to crash.

The Tesla driver, 38-year-old Walter Huang, was taken to hospital but died of his injuries. The other drivers survived.

The Tesla driver had not taken control of the car because he had been distracted by a smartphone video game
The Tesla's collision avoidance system was "not designed to detect the crash [barrier]"
Tesla's Autopilot system did not "provide an effective means of monitoring the driver's engagement"
The use of Tesla's Autopilot software has been implicated in several crashes.

The system lets the car operate semi-autonomously, changing lanes and adjusting its speed.

But critics say the "Autopilot" branding makes some drivers think the car is driving fully autonomously.

The NTSB said the driver had been "over-reliant" on the software.

Tesla does instruct drivers to keep their hands on the wheel when using Autopilot, and an audible warning sounds if they fail to do so.

But the NTSB said "monitoring of driver-applied steering wheel torque is an ineffective surrogate measure of driver engagement".

"If Tesla does not incorporate system safeguards that limit the use of the Autopilot system to those conditions for which it was designed, continued use of the system beyond its operational design domain is foreseeable and the risk for future crashes will remain," it said.

improving collision avoidance systems to include common obstacles such as traffic barriers
evaluating Tesla's Autopilot to determine whether the ability to operate it "outside the intended operational design" posed an unreasonable risk to safety
preventing automation complacency in drivers
requiring all new passenger vehicles with semi-autonomous features to be equipped with a driver monitoring system that meets new standards
It also suggested smartphone manufacturers should develop a "distracted driving lockout mechanism" to "disable any driver-distracting functions when a vehicle is in motion but that allows the device to be used in an emergency".

And it urged Apple to "implement a company policy that bans the non-emergency use of portable electronic devices while driving by all employees and contractors".

The NTSB also found a impact-absorbing crash barrier hit by the Tesla had been "in a damaged and non-operational condition at the time of the collision".

It said the California Highway Patrol had failed to report damage following a previous crash and it was "likely" the Tesla driver would have survived the crash if the barrier had been replaced.

BBC News has contacted Tesla for its response.