Coronavirus: Global shares fall for fifth day in a row 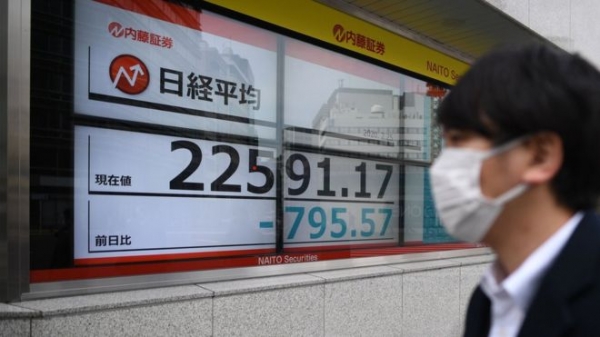 Stocks around the world have fallen for a fifth day amid growing concern about the coronavirus outbreak.

In London, the FTSE 100 index fell 1.1% in early trading, mirroring similar falls on other European

It comes as big firms warn they could see sharp losses while the virus continues to spread.

Share markets have faced days of turmoil, with the FTSE 100 hitting a 12-month low on Tuesday and the main US indexes losing more than 3% overnight.

Investors have been fleeing to safe haven assets such as gold, the price of which hit $1,650 an ounce on Wednesday - close to the seven-year highs seen earlier this week.

Drinks giant warns coronavirus will hit profits
Markets have been slow to acknowledge the threat of coronavirus, but more companies are now reporting that it has the potential to hit sales, as buyers stay at home and raw materials and parts get stuck at ports.

On Wednesday, drinks giant Diageo, which owns Guinness and Johnnie Walker whisky, said the coronavirus could cost it £200m in lost earnings this year. Its shares fell 1.4% in London.

'Concern continues'
Miner Rio Tinto lost 1.8% after it warned the disease could hit its operations in the next six months.

Food group Danone also cut its 2020 forecast for sales, blaming the outbreak and slower global growth - although its shares rose 1.4%.

"I think we should anticipate that this environment of heightened volatility and concern continues," Rebecca McVittie, investment director at Fidelity International, told the BBC's Today programme.

She said that countries that supplied parts for complex products - such as cars and computers - were increasingly being affected by the outbreak.

"I think we should anticipate that markets will probably move down."

The moves came as the outbreak continued to spread outside China, with Iran, South Korea and Italy reporting a surge in cases.

About 77,000 people in China, where the virus emerged last year, have been infected and nearly 2,600 have died. Outside China, more than 1,200 cases have been confirmed in about 30 countries and there have been more than 20 deaths.