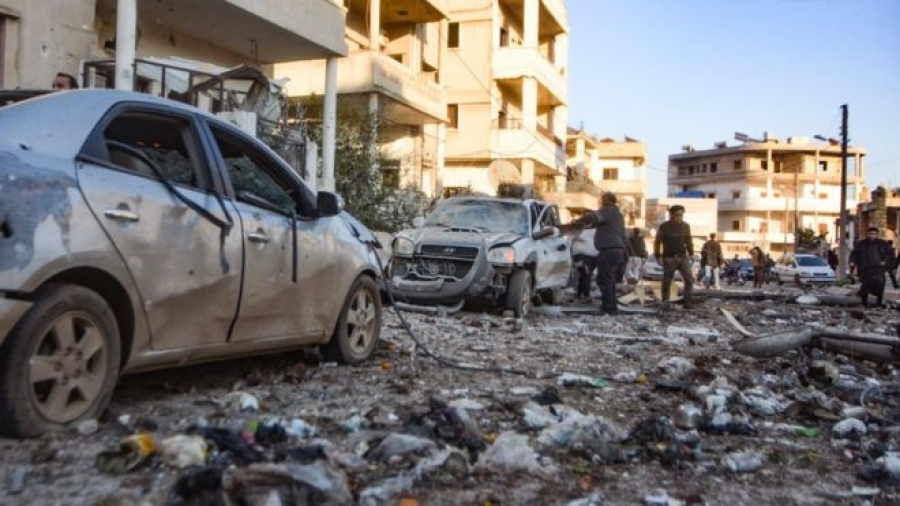 At least 20 civilians, including nine children, were killed in Syrian army strikes in the Idlib region on Tuesday, a Syrian human rights monitor said.

The Syrian Observatory for Human Rights said schools and hospitals were among the targets.

Regime forces have been fighting a fierce offensive to seize Idlib, the last major territory in Syria still controlled by rebels and jihadists.

About three million people are living in desperate conditions in the region.

A school child and three teachers, as well as two other people, were killed in Idlib city, he said, while at least six children were among the 10 civilians killed in Maarat Misrin, a town just north of Idlib city.

He added that another four people, including a mother and her two children, died in Binnish, north-east of the city.

The Union of Medical Care and Relief Organizations (UOSSM) said 10 schools in total - including two nurseries - and the Idlib Central Hospital were hit by airstrikes and ground attacks.

The organisation called the strikes "barbaric".

Heba Morayef, Amnesty International's Middle East and North Africa Regional Director, condemned the strikes, saying: "Schools should be safe places for children to learn and play, even in a conflict zone.

"Targeting schools and kindergartens being used for civilian purposes is a war crime."

The current humanitarian crisis in Idlib has been described as the worst since the start of the conflict in 2011.

The UN has previously warned that a full-scale battle for Idlib could result in a "bloodbath". Last week, UN Secretary General António Guterres called for an immediate ceasefire.

Why Idlib?
Idlib is the last stronghold of the rebel and jihadist fighters who have been trying to overthrow Syrian President Bashar al-Assad since 2011.

The opposition once controlled large parts of the country, but the Syrian army has retaken most of the territory over the past five years with the help of Russian air power and Iran-backed militiamen. Now, the army wants to "liberate" Idlib.

In recent years an influx of displaced people has doubled its population to about three million, including one million children.

Turkey, which backs the opposition to President Assad and fears another massive influx of Syrian refugees, has deployed troops to observation posts in Idlib under an agreement with Russia that set up a de-escalation zone - the 2018 Sochi accord.

However, it has failed to stop the Syrian army retaking large parts of the province with the help of Russian air strikes and Iran-backed militiamen.