Mexico worried by US ruling over boy's border killing 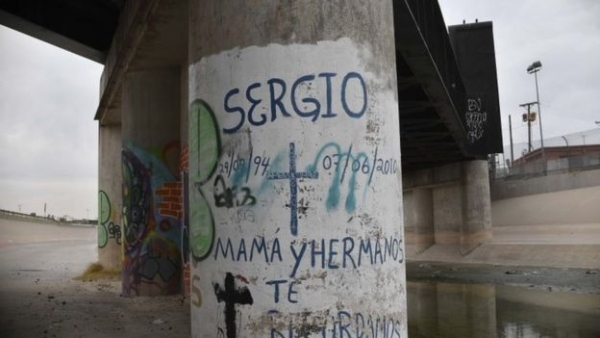 The Mexican government says it regrets a ruling by the US Supreme Court that bars the family of a Mexican boy who was killed in 2010 from suing the US border patrol agent who shot him.

The boy, Sergio Hernández, was shot dead on Mexican soil by US border patrol agent Jesús Mesa, who was on the US side of the border.

The court ruled that the parents could not use US courts to sue Mr Mesa.

The Mexican government says it is concerned it could set a precedent.

What happened in 2010?
The incident happened on the border between El Paso, Texas, and Juárez, Mexico. Agent Mesa was on a bicycle patrol on the US side of the border and was reportedly alerted to the presence of people smugglers.

Sergio Hernández, 15, was with a group of youths in the dry bed of the Rio Grande when Agent Mesa approached.

The international border runs through the middle of the concrete culvert built to contain the river but is unmarked.

His family said Sergio was playing with his friends, who were daring each other to run up the incline and touch the fence on the US side.

Agent Mesa detained one of the boys for illegally crossing the border, but Sergio Hernández and another boy ran and hid behind a pillar on the Mexican side.

He was shot twice by Agent Mesa as the boy peaked out from behind the pillar. An investigation by US authorities ruled that the agent had acted in self defence but found no evidence that Sergio Hernández had thrown any stones.

What was the court case about?
The Mexican authorities charged Agent Mesa with murder but the US authorities refused to extradite him so Sergio Hernández's family tried to sue Agent Mesa in the US for violating the US constitution by using excessive force.

Lower courts dismissed the case and it went to the US Supreme Court. In a five to four decision divided along conservative-liberal lines, the Supreme Court decided to uphold the lower court's decision.

The conservative justices argued that "a cross-border shooting is by definition an international incident" and called for a diplomatic, not a legal solution, arguing that allowing the case would have had "foreign relations and national security implications".

Dissenting Justice Ruth Bader Ginsberg said that "Mesa's allegedly unwarranted deployment of deadly force occurred on United States soil" and that it did not make sense to dismiss the action because the bullet had landed on Mexican soil.

What has the reaction been?
Mexico said it was worried the ruling would set a precedent for other incidents in which its nationals had been killed. The government expressed "deep concerns about the effects this decision will have on other similar cases, in which Mexican citizens have died from gunshots fired by US agents towards the Mexican side".

A lawyer for the family of Sergio Hernández warned the ruling would "promote a Wild West attitude on our border".

"To be left with no remedy... given such a violent and unprovoked shooting, weakens the constitutional foundation of America's house," Robert Hilliard said.