Health officials: Coronavirus spread to the US 'inevitable' 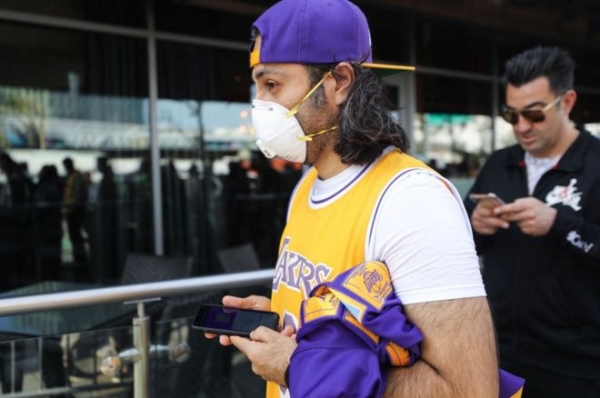 Health officials in the US have warned Americans to brace for the "inevitable" spread of the coronavirus disease that is sweeping the world.

There are 53 confirmed cases in the US, and officials are calling on Congress to urgently pass billions of dollars to fund the response effort.

On Wednesday in South Korea, the first case of coronavirus in the US military was confirmed at a military base.

The 23-year-old soldier is now under self-quarantine, US Forces Korea said.

President Trump had claimed that the spread of coronavirus was "well under control".

More than 2,700 people have died and some 80,000 have been taken ill, mostly in China where the virus originated.

Outside China, Iran, South Korea and Italy have reported the largest number of cases causing concern that the virus could be becoming a pandemic.

The first positive virus test has been recorded in Latin America - a 61-year-old Brazilian resident who had just returned from Italy. Local media reported that the man would be tested again for final confirmation.

On Tuesday, US Centers for Disease Control (CDC) and Prevention experts warned Americans of the coming outbreak.

"We are asking the American public to prepare for the expectation that this might be bad," said Dr Nancy Messonnier of the National Center for Immunisation and Respiratory Diseases in a conference call with reporters on Tuesday.

The warning marks a change of tone for the CDC, which, until now, has largely been focused on efforts to stop the contagion from entering the country and on quarantining people who have travelled from China.

What are US officials saying?
CDC health officials have outlined measures that schools and business may need to take, including limiting the size of classrooms, and employing "internet-based tele-schooling".

A vaccine will not be ready for more than a year, they say.

Meanwhile US Health and Human Services (HHS) Secretary Alex Azar has asked a Senate subcommittee to approve $2.5 bn (£1.9 bn) in funding to fight the outbreak.

"We cannot hermetically seal off the United States to a virus," he told lawmakers. "And we need to be realistic about that."

The money, he said, would pay for the US to expand its surveillance systems for the virus, would support local and state governments, and would help scientists develop vaccines.

Fears of a pandemic sent the Dow Jones and S&P 500 stock indices tumbling. The US indices saw their biggest four day percentage drop since December 2018.

Mr Azar also said the US needed to expand its stockpiles of protective equipment, like surgical masks. He said that right now the US has a stockpile of about 30 million masks, but it actually needs 300 million to supply to healthcare workers.

Earlier in the day President Donald Trump told reporters during a news conference in India that the disease is "very well under control in our country".

"I think the whole situation will start working out," he added.

What's happening with the virus globally?
A hotel in Tenerife, in Spain's Canary Islands, is in lockdown after a doctor from Italy visiting the hotel tested positive for the virus.

Hundreds of guests and staff remain at the hotel, but are being allowed to leave their rooms.

Italy has confirmed more than 320 cases in recent days, making it the worst-affected part of Europe. The confirmed deaths of three more people - all in their eighties - on Tuesday brought the total number of fatalities to 10.

In a bid to control the outbreak, several small towns in the north, home to tens of thousands of people, have been put under strict quarantine.

However, there are signs the virus is spreading, with new cases reported on Tuesday in Tuscany, Sicily and Liguria. Still, Italian Prime Minister Giuseppe Conte said his country remained safe for travel and tourism.

Also on Tuesday a plane carrying 140 Turkish nationals from Tehran to Istanbul was diverted to the Turkish capital, Ankara, where all those on board have been placed in quarantine despite not showing signs of infection.

Turkey has closed its border with Iran because of the outbreak.