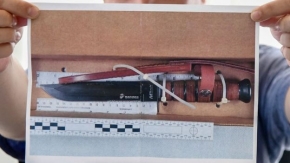 Two US students accused of murdering a police officer have appeared in court in Italy at the start of their trial. Mario Cerciello Rega, 35, was stabbed to death

last July as he investigated a drug deal gone wrong in central Rome.

The US students say they were acting in self-defence, believing the two officers - who they say did not identify themselves - were criminals.

Rega's murder received huge amounts of attention in Italy. He had only just returned to duty from his honeymoon, and huge crowds turned out for his funeral at the same church where was married just 43 days before.

But there have also been questions about how the case has been handled.

How did Rega die?
Mr Elder and Mr Natale-Hjorth - both teenagers at the time - were allegedly trying to buy cocaine last summer in the Trastevere area, near to Vatican City.

Investigators said a man named Sergio Brugiatelli helped the pair find a dealer. But the students were allegedly sold crushed aspirin instead of drugs.

Both men then are said to have taken Mr Brugiatelli's rucksack, and demanded their money back and a gram of cocaine in exchange.

At this point, Mr Brugiatelli allegedly rang the police. Undercover officers Rega and his partner, Andrea Varriale, arrived soon after.

During the ensuing brawl Rega was stabbed 11 times with an 18cm (7 inch) blade. Police said they later found the weapon hidden behind a false panel in the US students' hotel room.

Mr Elder has admitted stabbing the officer. But both he and Mr Natale-Hjorth stand accused of murdering Rega, and are also facing extortion charges.

How has the case been handled?
There have been a number of questions raised about the case in both the Italian and US media.

A leaked photo showing Mr Natale-Hjorth blindfolded and restrained at a police station appeared in the press shortly after their arrest. Rega's partner Mr Varriale later said he had filmed Mr Natale-Hjorth's interrogation on his phone, which is where the photo came from.

The police officer said he and Rega identified themselves on the night. But the US students say they saw no evidence they were police.

And Mr Varriale also faced a "dereliction of duty" charge for not carrying his weapon on the night. Neither he nor Rega were armed, which is against procedure.

Defence lawyers for the US students have also raised questions about the case.

Talks between Mr Elder and his lawyer appeared in the Italian media which suggested he had confessed. But the defence said the transcripts were badly translated and seemed to omit parts of their conversation.

Some in the US have even compared the case to that of Amanda Knox.

The US student served four years in prison for the murder of Meredith Kercher. Italy's top appeals court overturned her conviction in 2015.