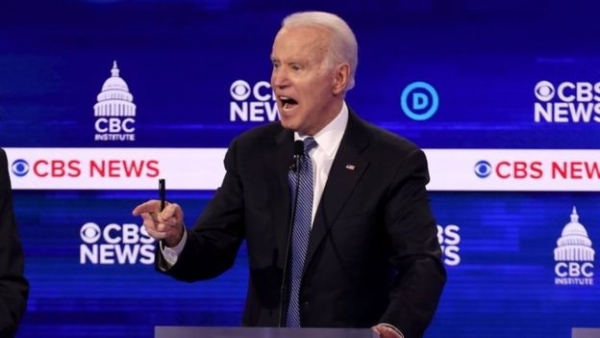 On stage in Nevada last week, the debate played out like a dinner-theatre murder mystery. Michael Bloomberg was the victim, while everyone else on the stage had a motive and the means to do him in.

This time, on Tuesday night, it was Bernie Sanders who got the rhetorical bludgeoning.

It was the last debate before South Carolina votes on Saturday - followed by 14 other states next Tuesday - and was full of tense moments and sharp exchanges, reflecting the high stakes.

"Vladimir Putin thinks that Donald Trump should be president of the United States," he said. "And that's why Russia is helping you get elected, so you will lose to him."

Elizabeth Warren, who hasn't often taken swipes at Sanders, said they both wanted universal healthcare, but she "dug in" and "did the work" to pay for her plan, and "Bernie's team trashed me for it".

After facing pressure from his opponents, Sanders backed away from his 2005 vote to protect gun manufacturers from legal liability for deaths from their products - a rare admission of error from the Vermont senator.

"I have cast thousands of votes, including bad votes," he said. "That was a bad vote."

He stood behind his recent praise of communist Cuba's literacy programmes (while still condemning the nation's human rights abuses.)

"Really? Literacy programs are bad?" Sanders exclaimed. "Occasionally it might be a good idea to be honest about American foreign policy. America has overthrown governments all over the world."

For two hours, Sanders faced slings and arrows from his opponents. He responded in typical Sanders fashion, with tried and true lines his supporters can probably recite from heart at this point.

It has worked for him so far.

Biden against a wall
It wasn't the fight most people were anticipating, but it was one they probably should have expected. Biden has his back to the wall in South Carolina, where he needs a win if he wants to keep his hopes of winning the nomination alive.

While Tom Steyer hasn't been much of a factor nationally, the self-funded billionaire candidate has spent heavily in South Carolina - and eaten into the former vice-president's support there.

On Tuesday night, Biden tried to take him down a peg, by criticising Steyer's investment in a company that ran private prisons cited for human-rights abuses.

When Steyer replied that he had sold his stock and had helped fund a bank to support black-owned businesses, Biden was ready with his rejoinder.

"Where we come from, that's called Tommy come lately," he quipped.

It may not have been the knockout blow Biden needed, but throughout the debate he showed a fire and a sense of urgency he's lacked in previous engagements.

Now, he has to hope that it's enough to give him a second lease of electoral life.

Bloomberg out of the spotlight
The Bloomberg campaign promised that Tuesday night's debate would go much better than last week's. They were right, although it had less to do with the candidate's performance than his opponents deciding they had bigger fish (Sanders) to fry.

That didn't stop the former mayor from almost torpedoing his candidacy again, by verbally stumbling and nearly saying that he "bought" - instead of "got" - all the winning candidates who enabled the Democratic takeover of the House of Representatives in the 2018 mid-term elections.

And then there was Elizabeth Warren, Bloomberg's nemesis last week, who made yet another run at the billionaire and his past funding of Republican candidates, including her 2000 Senate opponent, Scott Brown.

"I don't care how much money Mayor Bloomberg has," she said. "The core of the Democratic Party will never trust him. He has not earned their trust."

Bloomberg had a few bright moments, boasting of his economic and social policy record in New York City and highlighting his support for gun control. It's clear at this point, however, that his strongest campaign asset will be his limitless resources, not rhetorical flourishes in the debate hall.

No debate for gentlemen
It was a chaotic, sprawling debate, with candidates often talking over each other and the moderators. Many times their answers went on beyond the allotted time.

"I know it goes fast, but a minute 15 is really a long time," Gale King, one of the hosts, admonished Pete Buttigieg.

At one point, Joe Biden expressed exasperation, sardonically saying, "I know how you cut me off every time, but I'm not going to be quiet anymore."

Politics ain't a beanbag, as the old saying goes.

More in this category: « Harvey Weinstein accusers welcome rape and sexual assault conviction Health officials: Coronavirus spread to the US 'inevitable' »
Login to post comments
back to top