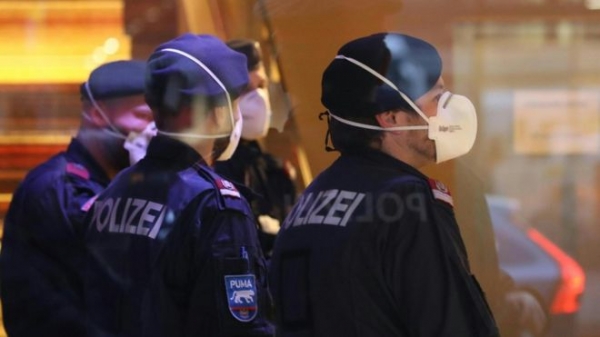 Several European countries have announced their first coronavirus cases, all apparently linked to the growing outbreak in Italy.

Austria, Croatia and Switzerland said the cases involved people who had been to Italy, as did Algeria in Africa.

The first positive virus test has been recorded in Latin America - a Brazilian resident just returned from Italy.

Italy has in recent days become Europe's worst-affected country, with more than 300 cases and 11 deaths.

But its neighbours have decided closing borders would be "disproportionate".

Health ministers from France, Germany, Italy and the EU Commission committed to keeping frontiers open at a meeting on Tuesday as new cases of the virus emerged throughout Europe and in central and southern Italy.

His German counterpart Jens Spahn said the neighbours were taking the situation "very, very seriously" but acknowledged "it could get worse before it gets better".

In the UK, schoolchildren returning from holidays in northern Italy have been sent home, with the government issuing new guidance to travellers.

But Health Secretary Matt Hancock said there were no plans to stop flights from Italy, which attracts about three million British visitors each year.

"If you look at Italy, they stopped all flights from China and they're now the worst-affected country in Europe," he said.

What's the latest around Europe?
In Austria, a young Italian couple who live in Innsbruck in the state of Tyrol were confirmed to have the virus. The couple's home was sealed off and a hotel that one of the pair worked at was put in lockdown. Officials on Wednesday said the lockdown on the hotel had been lifted, while nine people had been put under quarantine "as a precaution" following medical tests
Switzerland said a man in his seventies living in Ticino, bordering Italy, had been infected in the city of Milan on 15 February and was now in isolation
A man in Croatia who recently returned from Italy became the first confirmed patient in the Balkans
On the Spanish island of Tenerife, up to 1,000 guests were locked down in a hotel after an Italian doctor and his wife tested positive for the virus
Spain reported its first case on the mainland, involving a woman in Barcelona who had been to northern Italy
France and Germany reported new cases involving people who had recently been to northern Italy
France also confirmed the first death of a French national from the virus. The 60-year-old French man was the second fatality in the country, after an 80-year-old Chinese tourist died there earlier this month

What's the global picture?
More than 80,000 people have been infected with the coronavirus, which originated in China.

Officials in Iran on Wednesday said 19 people had died from the coronavirus, while 139 had been infected.

It is widely believed that the scale of infection in Iran is far greater than official figures suggest. The infection of the country's deputy health minister has deepened fears that the virus has already spread widely.

President Hassan Rouhani said there were no plans to impose quarantine rules on any cities or regions, but that "if an individual has early symptoms, that person must be quarantined."

South Korea on Wednesday reported 115 new cases of the coronavirus, bringing the total number of infections there to 1,261, according to local media reports. Eleven people have died in the country, which has the most infections outside China.

The US military confirmed that one of its soldiers based in South Korea had tested positive for the virus, marking the first infection of a US service member. It said the 23-year-old soldier - who had been based near the city of Daegu - was in self-quarantine.

Some 28,500 US troops are stationed in South Korea as a deterrent against potential aggression from North Korea.

Many of the cases in South Korea are linked to a branch of the Shincheonji Church of Jesus in the city of Daegu. All the church's more than 215,000 members are now being tested by health authorities, according to reports.

In Brazil, local media reported on Tuesday that an initial test on a 61-year-old man who had recently been to northern Italy had come out positive.

They said the man, from São Paulo, would be tested again for final confirmation.

The individual, whose name was not given, arrived back in Brazil at the height of the carnival festivities, when millions of people travel around the country. Officials fear the timing of his return makes it more likely the coronavirus could have spread.

In Japan, Prime Minister Shinzo Abe called on organisers of big sports and cultural events to cancel or postpone them for two weeks amid concerns that the coronavirus could threaten the 2020 Tokyo Olympics.

Most of the cases of the new coronavirus remain in China, where the virus originated last year.

According to the latest figures published on Wednesday, 78,064 people have been infected since the outbreak began.

Numbers of new infections have been declining in the country. Several regions have downgraded their emergency response levels after assessing that the health risks have receded.

Much attention has now turned to clusters of cases abroad and transmission between countries.

The director general of the World Health Organization (WHO) has said the sudden increase in cases in countries outside China is "deeply concerning".

On Tuesday, the US Centers for Disease Control and Prevention warned that the virus could bring "severe" disruption to the US, with one official saying it was not a question of if but when the virus would become a global pandemic.

Meanwhile, US Secretary of State Mike Pompeo urged all nations to "tell the truth about the coronavirus", saying that Washington was concerned that Iran may have concealed "vital details" about its outbreak.

Of the current hot-spots outside China,Iran is the most concerning because of the lack of an accurate picture of how widespread the outbreak really is, said Dr Nathalie MacDermott, an expert in infectious diseases at King's College London.

Most of the reported cases have been people who are elderly and dying, she said. "It seems like we're hearing about the tip of the iceberg and missing that chunk underneath who may be younger and may not be particularly unwell."

There are fears that the many Muslim Shia pilgrims and migrant workers who will have travelled between Iran and other parts of the region in recent weeks could have already spread the virus.

Iran is believed to have been the source of the first cases reported by neighbouring Afghanistan, Bahrain, Iraq, Kuwait and Oman, which have now imposed restrictions on travel to and from the Islamic Republic.

More in this category: « Coronavirus: Tenerife hotel with hundreds of guests locked down Coronavirus in Europe: epidemic or 'infodemic'? »
Login to post comments
back to top