Donald Trump in India: Key deals signed on defence but not on trade 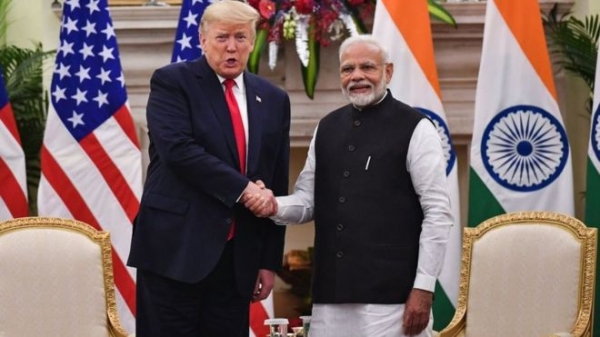 India and the US have signed defence, energy and telecoms deals but failed to reach a much-talked about trade accord. President Donald Trump hailed a "very productive visit" but said he would keep working with Indian PM Narendra Modi for

The US is one of India's biggest trade partners. The two leaders hope the visit will mend a rift over tariffs.

Mr Trump's visit to Delhi has been marred by the deadliest religious unrest in the capital for decades.

Asked about the violence, he told reporters that the incident was "up to India" to handle.

However, he said he had brought up the issue of religious freedom in the country and was impressed by Mr Modi's response.

"He [Modi] was incredible, he told me- 'In India we have worked very hard to have religious freedoms'," Mr Trump said.

Ten people, including a policeman, have been killed and about 150 injured in protests against a controversial new citizenship law, which critics say discriminates against Muslims.

Mr Modi's Hindu nationalist government denies this, saying the law only seeks to give amnesty to persecuted minorities.

Correspondents say the timing of the unrest is an embarrassment to Mr Modi and the violence has taken the spotlight away from Mr Trump's visit.

After talks on Tuesday, the US president and Mr Modi acknowledged they had not been able to sign a trade deal, but announced that negotiations would continue.

"We also agreed to open negotiations on a big trade deal. At the global level, our relationship is depended on the similar democratic values we share," Mr Modi said.

But deals in other areas were announced.

India is to buy attack helicopters and other US military equipment worth $3bn, Mr Trump said.

They also announced co-operation in fighting radical Islamist terrorism and deepening energy ties, as well as pledging to work together to make 5G technology safer. As part of the deals announced, US firm Exxon Mobil and Indian Oil have signed an agreement to help India import more Liquefied Natural Gas (LPG).

India imposed retaliatory tariffs on 28 US products, causing a diplomatic rift between the two countries.

But Mr Trump's visit has helped improve relations, and cement what appears to be a strong personal rapport between him and Mr Modi.

Mr Trump's two-day India visit has been high on optics. Tens of thousands of people lined the streets of Ahmedabad city in Gujarat, the home state of Mr Modi, to welcome him on Monday. The leaders later addressed a crowd of more than 100,000 people at the Motera cricket stadium. Mr Trump ended the day with a city to the iconic Taj Mahal.

"The last two days, especially yesterday at the stadium, it was a great honour for me. People were there maybe more for you [PM Narendra Modi] than for me... Every time I mentioned you, they cheered more. People love you here," President Trump said.

More in this category: « Taj Mahal: US President Donald Trump visits the 'monument of love' in Agra
Login to post comments
back to top