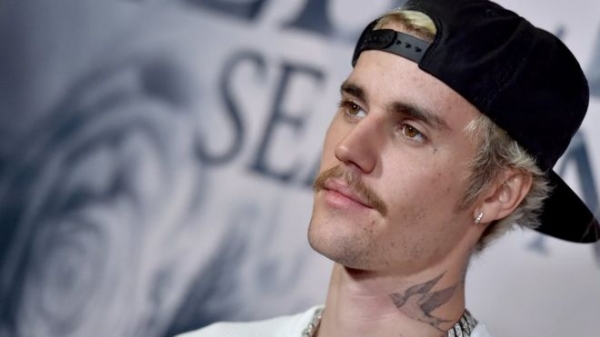 Justin Bieber's seventh album, Changes, has debuted at the top of the US Billboard chart - beating a record set by Elvis Presley 59 years ago.

The Canadian singer is now the youngest solo artist to achieve seven number one albums, at the age of 25 years.

Elvis was 26 when he scored his seventh chart-topper, with Blue Hawaii in 1961.

Inside Justin Bieber's (slightly odd) album playback
The album finds the star reflecting on teen stardom as he enters adulthood, with many of the tracks dedicated to his new wife, model and actress Hailey Baldwin.

It has enjoyed a warmer reception from US critics than from their UK counterparts; with the New York Times praising Bieber's "soothing, tender" vocals and "tonally cool R&B".

The Independent newspaper was more scathing, saying that the lyrics about Baldwin "are so uninspired that [Bieber] may as well be declaring his love for a household appliance".

"Bieber often veers into cliché," agreed The Slant, but "there's a real charm to the songs that rest so deeply [on] trust and commitment."

BTS are coming for the crown
Billboard, which compiles the US chart, confirmed that Bieber had beaten Elvis's chart record - but added that, if groups were taken into account, all four members of The Beatles were younger than Bieber when they scored their seventh number one.

The band's oldest member, Ringo Starr, was 25 when Rubber Soul hit the charts in 1966; while the youngest member, George Harrison, was just 22.

Bieber also had a head-start on his competitors. He released his first number one album when he was 16, whereas Elvis was 21 and George Harrison was 20.

Despite his achievement, Bieber is unlikely to enjoy a long reign at the top of the charts.

That was enough to make it the world's biggest-selling album since Ed Sheeran's Divide (2017) before it was even released. The record has since topped the iTunes download charts worldwide, making it almost certain to reach number one when sales and streams are collated for US and UK charts at the end of the week.

An early sales update from the UK's Official Chart Company said the album's lead track, On, was currently on course to be the highest new entry in the singles chart, at number eight; while the album was outselling its three nearest competitors combined.

More in this category: « Lana Del Rey cancels tour due to losing her voice Plácido Domingo apologises to women who accused him of sexual harassment »
Login to post comments
back to top