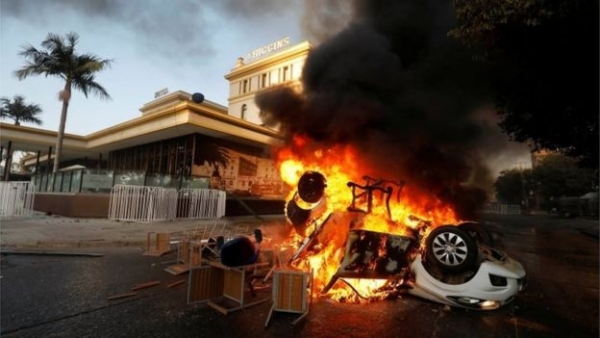 and the O'Higgins Hotel, where many of the artists are staying.

The local governor denounced their actions as "vandalism".

The clashes are the latest show of discontent after four months of protests against economic inequality.

At the height of the protests in October, Chile pulled out of hosting two major international summits, the COP25 climate summit and the Apec trade forum, for fear of violence.

What happened?
A group of about 150 masked protesters set alight at least seven cars in front of the O'Higgins hotel on Sunday.

Police deployed water cannons and at around 20:00 local time (23:00 GMT), guests were temporarily evacuated from the hotel.

There were also clashes near the entrance to the Quinta Vergara park, where the annual Viña del Mar music festival is held.

The masked protesters later moved to the municipal offices, where they smashed windows and broke down doors. More than a dozen shops were also looted or damaged.

Among the shops which came under attack were two car dealerships, where more cars were set alight. Fifteen people were arrested and 23 police officers were injured, officials said.

What's been the reaction?
The governor of Valparaíso region, where Viña del Mar is located, blamed this latest violence on "radical groups which are very much in the minority". "They want anarchy, they want disorder and violence," Governor Jorge Martínez added.

The mayor of Viña del Mar, Virginia Reginato, also denounced the incidents. "You can have demonstrations but this is criminal and will be treated as such," she said.

What's behind this?
The clashes come four months into a series of anti-government protests. They were originally triggered by a rise in the metro fare in the capital, Santiago, but soon became a much wider movement denouncing inequality in Chile, the high costs of healthcare and poor funding of education.

Excessive use of force by police, with hundreds of protesters blinded by rubber bullets, further stoked Chileans' anger.

Protesters also took issue with Chile's constitution, which dates back to the years of military rule under Gen Augusto Pinochet. With pressure mounting, President Sebastián Piñera agreed to schedule a referendum on whether to change the constitution for April.

But many Chileans say they want to see more than just the constitution changed and frustration is again on the rise with politicians accused of not listening to the people.

How was the festival affected?
Fans faced unprecedented security measures this year including metal detectors, turnstiles and high barriers.

The planned opening act of the music festival featuring Chilean hip hop band Tiro de Gracia and singer Jordan did not take place after some of the musicians were caught up in the evacuation of the O'Higgins hotel. The opening has in the previous years been of the most watched televised events in Chile.

The event finally started with a short delay and with presenter Martín Cárcomo saying that "we all have a dream". "We dream of a better future, of a just, diverse and inclusive Chile with more and better opportunities for all.

Puerto Rican singer Ricky Martin opened the show and told Chileans he was "with you Chile, never silent, always with love and peace".

He had earlier said that it was "important to let the leaders of our countries know what we need, provided we do so in an orderly manner". The singer joined protests in Puerto Rico last year which led to the resignation of the island's governor.

More in this category: « Brazil senator Cid Gomes shot in stand-off with police Mexico worried by US ruling over boy's border killing »
Login to post comments
back to top