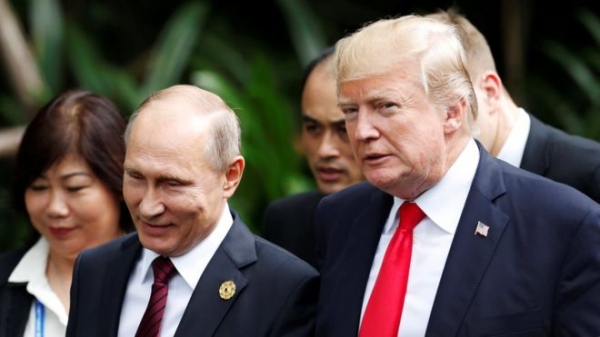 US intelligence agencies have warned that Russia is attempting to help President Donald Trump get re-elected in November, US media report.

The comments came in a closed-door briefing to the House Intelligence Committee on 13 February, officials told US outlets.

President Trump was reportedly enraged, complaining that Democrats would use the information against him.

He replaced his acting intelligence chief, Joseph Maguire, on Thursday.

The New York Times reported that Mr Trump was particularly angry that Adam Schiff, the Democrat who led the impeachment proceedings against him, was at the briefing.

During the House intelligence briefing, Mr Trump's supporters argued that the president had taken a hard stance with Russia, and that European ties and security had been strengthened as a result, the newspaper added.

Mueller: Trump was not exonerated
All you need to know about Trump Russia story
Mr Schiff later tweeted that if Mr Trump was in any way "interfering" with the sharing of information between US intelligence agencies and Congress regarding foreign interference in the election process, the president was "jeopardising" attempts to stop it.

Mr Trump was impeached by the House of Representatives but acquitted by the Republican-controlled Senate over charges stemming from an earlier inquiry into Russia's alleged role to help him get elected in 2016.

Mr Maguire was a favourite to be nominated for the permanent Director of National Intelligence (DNI) post, the Washington Post said.

However, the paper said the president changed his mind when he found out about the briefing, and what he called the "disloyalty" of his staff.

The president announced this week that Mr Maguire would be replaced by Richard Grenell, the US ambassador to Germany and a Trump loyalist.

Two Trump administration officials told the New York Times that the replacement of Mr Maguire, so soon after the contentious briefing, was a coincidence.

Democrats criticised the president for appointing Mr Grenell, who has previously played down the extent of Russian interference in the last election, and has celebrated the rise of far-right politicians in Europe.

What is the Trump-Russia controversy about?
Russia is a sensitive subject for Mr Trump.

US intelligence agencies concluded in 2016 that Russia used a strategy of cyber attacks and fake news stories in an effort to skew the election against Democrat Hillary Clinton.

Mr Trump's presidential campaign and transition teams were accused of conspiring with Kremlin agents, setting off an inquiry that lasted nearly two years.

The American president and his Russian counterpart denied any collusion. Mr Trump has often called the investigation into Russian meddling a "political witch hunt".

How Trump's Russia trouble unfolded
The Trump-Russia saga in 350 words
In 2017, the US president also came under scrutiny for sacking FBI chief James Comey, who was leading one of the investigations into Mr Trump's ex-national security adviser Michael Flynn, who had lied to the FBI over contacts with top Russian officials.

Later that year, former FBI director Robert Mueller was appointed as special counsel to lead the inquiry into the Trump-Russia allegations.

Mr Mueller submitted a 448-page report in 2019 that offered a mixed picture of Mr Trump's conduct.

It did not find that the president's campaign criminally conspired with Russia during the election, but did suggest Mr Trump obstructed justice.

Mr Mueller said the report was not an exoneration, but he would not say that Mr Trump committed a crime.