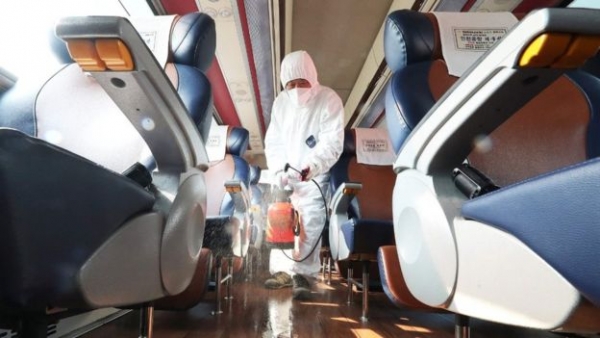 South Korea has stepped up measures to contain the spread of the deadly new coronavirus, as confirmed infections increased sharply for a second day.

PM Chung Sye-kyun said it was now an emergency as 100 new cases and the country's second death were confirmed.

The virus has also spread in Iran, which reported two further deaths among 13 new cases, bringing the total number of deaths there to four.

In Iran the outbreak is centred on the holy city of Qom, south of the capital Tehran, but health ministry official Minou Mohrez said it was possible that the virus had spread to "all cities in Iran".

The case in Lebanon was a 45-year-old woman who had travelled from Qom, Lebanese Health Minister Hassan Hamad said.

What is the latest in South Korea?
The southern cities of Daegu and Cheongdo have been declared "special care zones". The streets of Daegu are now largely abandoned.

All military bases are in lockdown after three soldiers tested positive.

About 9,000 members of a religious group were told to self quarantine, after the sect was identified as a coronavirus hotbed.

The authorities suspect the current outbreak in South Korea originated in Cheongdo, pointing out that a large number of sect followers attended a funeral of the founder's brother from 31 January to 2 February.

On Friday, a second person who contracted the coronavirus died.

South Korean sect identified as coronavirus hotbed
What you need to know about the virus
A visual guide to the outbreak
Pregnant nurse 'propaganda' sparks backlash
The victim was a woman in her 50s. She died in the south-western city of Busan after being transferred there from a hospital in a nearby country, according to Yonhap news agency.

Reports say she had earlier been a patient at the same mental hospital in Cheongdo as the country's first victim - an elderly man. Another 15 patients there have also tested positive.

On Thursday, 53 new cases were reported. South Korea now has a total of 204 cases making it the largest cluster outside mainland China and the cruise ship docked off Japan.

What measures are being taken?
From the 100 new cases reported on Friday, 86 were in Daegu, a city 300km (186 miles) south-east of the capital Seoul, and nearly all of those were from a cluster involving the religious sect.

Reacting to the quickly deteriorating situation, the government promised swift measures to prevent further spread of the virus.

"It is urgent to find people who have contacted infected people and cure patients," PM Chung said, according to Yonhap.

He said the government was readying resources like sickbeds, medical equipment and health workers and warned the virus was now spreading locally.

"The government has so far focused on curbing infections coming from outside the country. From now on, the government will further prioritise preventing the virus from spreading locally."

Health Minister Park Neung-hoo said authorities would allow hospitals to isolate respiratory patients from others in an effort to prevent any spread within medical institutions.

He also said that all pneumonia patients in Daegu hospitals would be checked for the virus.

What happened in Daegu?
The city's biggest cluster appears to be at a branch of a religious sect which calls itself the Shincheonji Church of Jesus, Temple of the Tabernacle of the Testimony.

South Korean health officials believe these infections are linked to a 61-year-old woman who tested positive for the virus earlier this week.

The Shincheonji, which has been accused of being a cult, said it had now shut down its Daegu branch and that services in other regions would be held online or individually at home.

As of Friday, more than 400 members of the church were showing symptoms of the disease, though tests were still ongoing, the city mayor said.