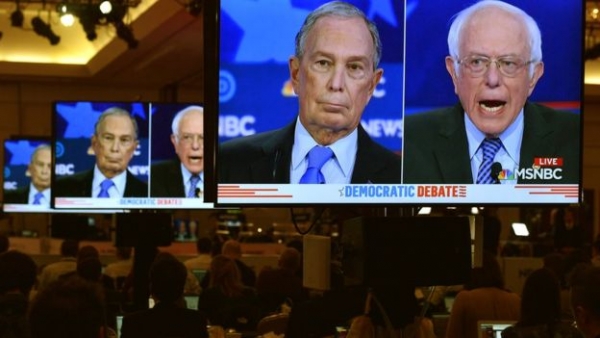 In a punchy debate worthy of Las Vegas, billionaire Michael Bloomberg came under attack from all sides. The field of candidates for the Democratic Party's presidential nomination

has been shrinking for months, but on Wednesday night in Nevada, the debate stage had one significant new arrival.

For the first time since he launched his unconventional, money-suffused campaign in November, the former New York mayor directly faced off against his opponents.

And they nearly took his face off, rhetorically speaking. Here's how the two-hour fight for the right to challenge Republican President Donald Trump in November's election went down.

Everyone v Bloomberg
Right out of the starting gate, candidate after candidate took turns taking shots at the newcomer to the contest. It was the political equivalent of an incredibly lopsided tag-team wrestling match.

Elizabeth Warren brought up derogatory comments Bloomberg is reported to have made about women and the private agreements he has made to settle sexual harassment and hostile workplace lawsuits.

"Democrats take a huge risk if we just substitute one arrogant billionaire for another," she said, in an attempt to tie Bloomberg to Donald Trump.

Meanwhile, Pete Buttigieg used one answer to go after both Bloomberg and Bernie Sanders, who it should not be forgotten is leading the national polls at the moment.

He warned that if Sanders and Bloomberg are the only candidates left standing after the next few rounds of voting, Democrats will be left with two polarising figures - "a socialist who thinks that capitalism is the root of all evil and a billionaire who thinks money is the root of all power".

How did Bloomberg defend himself?
All of Bloomberg's opponents had their attack lines rehearsed and ready to launch, and Bloomberg at times appeared to struggle to keep up.

He apologised for his stop-and-frisk policy, saying that he didn't realise how harmful it was to his city's black community. He stood by his decision not to drop the nondisclosure agreements that keep details of the lawsuits against his companies private, adding "None of them have accused me of doing anything wrong, except maybe they didn't like the joke I told."

That solicited groans from the audience.

It's been more than 10 years since Bloomberg has participated in any kind of political debate. On Wednesday night, he dived headfirst into the deep end of the pool. The American public will soon have a chance to decide if he sinks or swims.

Who is Michael Bloomberg?
Meet the voters behind Bloomberg's surge
Everyone v Sanders
The Sanders campaign team may insist that the man who has made a career of being a political outsider should never be considered a front-runner for the presidential nomination. But what else do you call someone who leads the national polls, has the best fundraising numbers and boasts a vast, experienced campaign organisation?

And Sanders learned on Wednesday that when you're leading the pack, everyone can see the target on your back.

Buttigieg, the former mayor of South Bend, Indiana, took the opportunity to slam the Vermont senator on the hostility his supporters sometimes show on social media - and what Buttigieg said was his campaign's tolerance of them.

"I think you have to accept some responsibility and ask yourself what it is about your campaign in particular that seems to be motivating this behaviour more than others," he said.

The sharpest swipes, not surprisingly came from Bloomberg - who was perhaps relieved he could regain his footing and go on the attack. Early on, he said that there was "no chance" Sanders could beat Donald Trump. He followed it up by suggesting Sanders' political theories had been consigned to history's dustbin.

"We're not going to throw out capitalism," he said to Sanders. "We tried that. Other countries tried that. It was called communism, and it just didn't work."

Sanders told Bloomberg that was a "cheap shot," adding that his democratic socialism is not communism.

Could it be Bernie Sanders v Donald Trump?
Five charts on the Democratic race
Even Warren, who usually pulls her punches against her fellow progressive, had a few sharp lines on Sanders' healthcare plan.

Past front-runners have seen their fortunes fall eventually, as the attacks gained ferocity. Sanders benefits from being at the top at the right time - as the primary voting is underway. If he wants to stay on top, he's going to have to earn it.

Everyone v Everyone
With the primaries in full swing, it is desperate times for many of the candidates. The debate was two-hour proof of just how tense things are getting.

Warren is normally a placid debater, but facing sagging poll numbers and a poor result in New Hampshire, she went on the attack against pretty much everyone, positioning herself as a compromise between the moderates and Sanders.

Warren's performance may leave her supporters wondering what might have been if she had showed this kind of fire before New Hampshire - and how much they'd love to see this Warren face off against Donald Trump.

Speaking of the moderates, one of the most vicious series of exchanges was between Klobuchar and Buttigieg. She accused him of mocking her intelligence. He said she was belittling his mayoral experience.

"I wish I were as perfect as you, Pete," Klobuchar said with barely concealed contempt. The two did not shake hands when it was all over.

In the end, the debate may leave the field as muddled as it was going in. Given his relative strength, Sanders will probably leave Las Vegas with his momentum intact.

What are the key issues for all the candidates?
Are voters biased against women candidates?
Bloomberg, the real wildcard, may find some of his newfound supporters wondering how to reconcile his slick appearance in his ever-present commercials with the sometimes halting, tin-eared man on stage.

Biden and Warren both showed some fire they hope will rekindle their campaigns before it's too late, while Klobuchar and Buttigieg might be satisfied seeing the other consumed by flames.

In six days, they'll get to do it all again in Charleston, South Carolina. At this rate, security might want to screen the participants for hidden weapons.