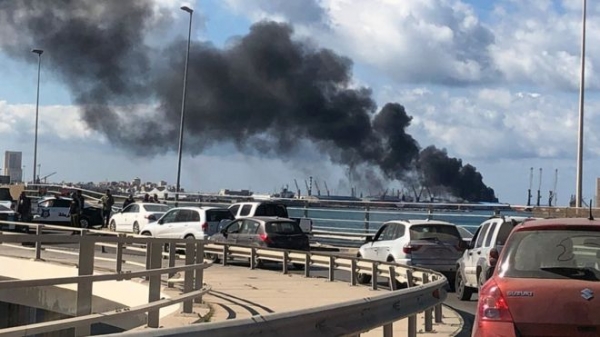 Libya's UN-backed government has withdrawn from peace talks after the capital was hit by rocket fire. It said the port was one of the targets struck by forces

The city has been under siege for almost a year, and relies heavily on shipping to feed its population.

Top negotiations to broker a lasting ceasefire between the two sides in the civil war have faltered several times.

"There can be no peace under the bombing," the UN-backed Government of National Accord (GNA) said.

"We are announcing the suspension of our participation in the military talks taking place in Geneva until firm positions are adopted against the aggressor [Gen Haftar]", it said.

The conflict in the oil-rich nation has been complicated by the role of foreign states.

UN chief António Guterres recently termed the conflict a "proxy war", adding in a recent interview with the BBC, that it was "unacceptable".

The fighting has left more than 1,000 people dead and forced some 140,000 from their homes, according to the UN.

Earlier this week, European foreign ministers meeting in the Belgian capital, Brussels, agreed to a new naval and air mission to stop more arms from reaching warring factions in Libya.

Libya has been torn by conflict since the 2011 uprising which ousted long-time strongman Muammar Gaddafi.