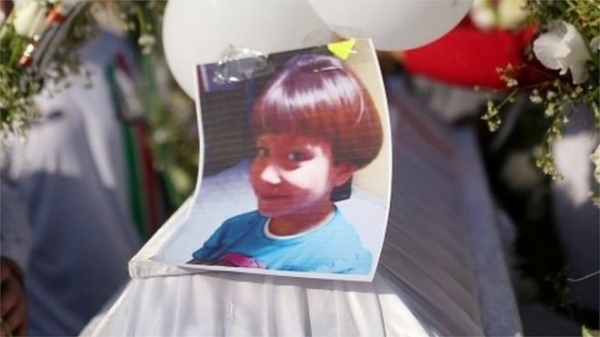 Mexican police are searching for a woman who was seen on surveillance camera with a seven-year-old girl outside her school on the day she disappeared.

The video from 11 February is the last time the child, Fátima Aldrighett, is seen alive. Her body was found dumped with signs of abuse four days later.

Officials say the woman was identified thanks to a tip-off from her landlord.

She had fled her apartment where police found clothes belonging to the girl.

What happened to the girl?
Fátima Aldrighett was waiting for her mother to pick her up outside her school in Mexico City when she disappeared.

Local media reported that her mother had been caught in traffic and was running late and that the girl had been left to wait outside the school on her own. The family reported her missing when she was not to be found.

Her body was found in a plastic bag in the city's Tláhuac neighbourhood on Saturday.

Mexicans post 'beautiful images' for murdered woman
Global protests denounce violence against women
Footage from surveillance cameras outside the school showed a woman walking away with girl on the day of her disappearance.

Police offered a reward of two million Mexican pesos (£83,000; $108,000) for information which would lead them to the woman, believed to be between 42 and 45 years old, according to the prosecutor's office.

A tip-off from a landlord led police to an apartment in the Xochimilco area of the capital, not far from where the girl lived with her family.

Police found the girl's shoes and her sweater as well as the clothes the female suspect wore on the day of the girl's abduction.

What has the reaction been?
The case has caused outrage in Mexico with hundreds of thousands of people tweeting the hashtag #JusticiaParaFatima (#JusticeForFatima).

Relatives have criticised the authorities over their handling of the case, saying police and officials had acted too slowly.

"Fátima is not with us because the protocols were not followed, because the institutions did not give it the attention they should have," said the girl's aunt, Sonia López.

Ms López said that even before the girl's disappearance, Fátima's mother, who has health problems, did not receive the support from social services that she should have.

Mexico City's Attorney General, Ernestina Godoy, said there would be an investigation into how the case was handled.

What's the background?
The discovery of the girl's body came a week after the brutal murder of Ingrid Escamilla. The 25-year-old was found killed and dismembered in the home she shared with her partner, who told police he had stabbed her and tried to dispose of her body.

These two most recent cases have highlighted the number of women and girls murdered in Mexico, where an average of 10 are killed every day.

Asked about a 10% rise in femicides, murders of women because of their gender, Mexico's left-wing president, Andrés Manuel López Obrador, blamed "neoliberal policies".

"This is the rotten fruit of selfishness and the accumulation of goods in a few hands and the abandonment of the majority of our people."

His statement angered many Mexicans, including Fátima Aldrighett's grandfather, who said the president should not be blaming his predecessors in office.

"Now he is in charge, he is president... He should show us he is different."

President López Obrador also responded to protesters who had daubed slogans on the outside of the National Palace.

"I ask all the feminists, with due respect, don't paint on our doors and our walls, we are working to stop femicides. Don't confuse us with repressors, we know how to respond to provocation," he added.