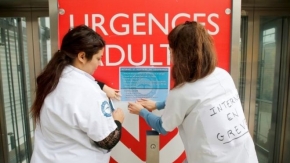 Nine mayors in France have banned falling ill, in a symbolic move to highlight the lack of local doctors. A decree signed by the mayors in rural parts

of Sarthe, an area west of Paris, says requiring medical care because of accident or sickness is prohibited.

They say their aim is to warn the government about the difficulties of accessing health services in the area.

Staffing issues, bed shortages and the closure of facilities were among the problems they highlighted.

The four-article decree says it is forbidden to seek medical attention, have an accident or "to be born with health problems" in the area.

It is, however, permissible to move to Paris to "access efficient health services", the decree adds ironically.

The decree does not have any force of law. Rather, it has been described as a "symbolic but strong act" by the mayors.

"We want to alert the public authorities to the lack of doctors," said Dominique Dhumeaux, president of the association of rural mayors of Sarthe and mayor of Fercé-sur-Sarthe.

"It is the survival of our territory that is at stake. The government must take up the problem head on."

He said the "remoteness of hospitals and doctors increases the risk" to patients. Mr Dhumeaux urged other mayors in the area to sign the decree.

Access to medical care has been a growing problem at the national level too.

Last year, a survey found more than four in 10 French people had given up or postponed seeking treatment because of waiting times.

More in this category: « Verdict due for Turkish activists held on terror charges Germany shooting: 'Far-right extremist' carried out shisha bars attacks »
Login to post comments
back to top