Verdict due for Turkish activists held on terror charges 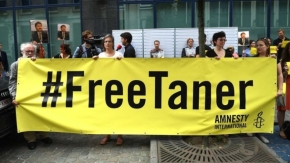 A Turkish court is to issue a verdict on the case of 11 rights activists arrested in 2017 on terror charges, a case that has been widely criticised.

They include Taner Kilic and Idil Eser, the former head and former director of human rights group Amnesty International in Turkey respectively.

All 11 are accused of having links to US-based cleric Fethullah Gulen, leader of a banned group which Turkey blames for a failed coup attempt in 2016.

They have denied the charges.

They have since been released on bail, but are awaiting a ruling on the case.

In a statement, Amnesty said the charges have been "repeatedly and categorically disproven", and called for the immediate acquittal of the activists.

Speaking outside the court ahead of the ruling, Mr Kilic said he was "optimistic for justice".

Wednesday's verdict comes the day after the prominent businessman and rights activist Osman Kavala was re-arrested just hours after his acquittal, on a new warrant issued over the attempt to oust Turkey's President Recep Tayyip Erdogan in 2016.

In December, the European Court of Human Rights ruled that Mr Kavala had been arbitrarily detained and called for his immediate release.

Authorities in Turkey have arrested tens of thousands of people and fired thousands more teachers and civil servants in a major crackdown since the attempted coup, a move that has been strongly criticised by the country's Western allies.

President Erdogan says the plot was orchestrated by Mr Gulen, who denies any involvement.

What's the background?
Mr Kilic was arrested in June 2017 at his home in Izmir.

The then-president of Amnesty Turkey was accused of using an encrypted messaging application called ByLock, which the authorities say Gulen supporters shared to avoid detection.

Mr Taner's defence said forensic experts found no evidence ByLock had ever been downloaded on his phone.

The following month, ten human rights activists - including Idil Eser were detained on Buyukada island near Istanbul. They were charged with aiding terror groups, including supporters of Mr Gulen.

All were eventually released on bail - Mr Kilic spent more than a year behind bars - though the charges against them remained.