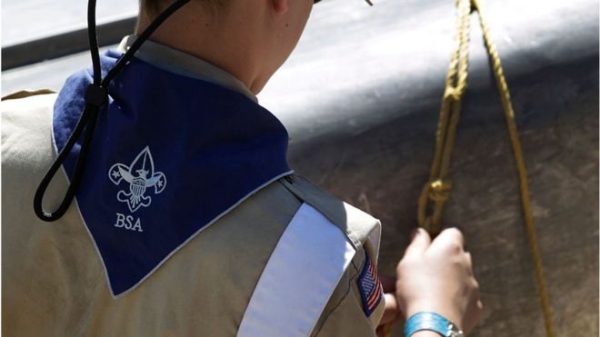 The Boy Scouts of America (BSA) has filed for bankruptcy protection in a move that the group says will allow it to build a compensation fund for sex abuse victims.

The move follows a number of lawsuits filed against the organisation over claims of sexual abuse, alleging it failed to prevent hundreds of cases.

As a result of the move, all civil lawsuits against it are put on hold.

The group is struggling with declining membership as well as abuse claims.

"The BSA cares deeply about all victims of abuse and sincerely apologises to anyone who was harmed during their time in scouting. We are outraged that there have been times when individuals took advantage of our programs to harm innocent children," chief executive Roger Mosby said in a statement.

Court papers filed in Delaware listed liabilities of up to $1bn (£768m) and assets of as much as $10bn, reports say.

The filing was made under Chapter 11 of the US bankruptcy code which allows the group to keep operating and pay its creditors over time.

The bankruptcy allows the organisation to bring all of the lawsuits into one court and try to negotiate a settlement, rather than using its funds to fight each case in court.

"While we know nothing can undo the tragic abuse that victims suffered, we believe the Chapter 11 process - with the proposed trust structure - will provide equitable compensation to all victims while maintaining the BSA's important mission," Mr Mosby said in a statement.

The BSA has 261 councils which operate local troops and own assets including land in many states, the Wall Street Journal (WSJ) reports. Tuesday's bankruptcy move is designed to protect those councils, which hold about 70% of all BSA assets, according to the WSJ.

In its statement, the BSA said the councils, which are legally separate and financially independent of the national organisation, had not filed for bankruptcy.

More in this category: « Bloomberg to join Democratic debate amid poll surge US Election 2020: Meet the voters behind Bloomberg's surge »
Login to post comments
back to top