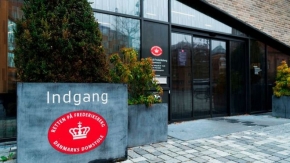 A Danish court is due to deliver its verdict in the case of a woman accused of stealing 117 million Danish kroner (£13m; $17m) of government funding.

Britta Nielsen worked at Denmark's social services board for 40 years, distributing funding to people in need.

But in 2018 she was accused of siphoning funds to her own pockets.

Ms Nielsen fled to South Africa after the accusations surfaced. She agreed to return to Denmark after Interpol issued an arrest warrant.

She was accused of embezzling cash for more than 25 years.

The case is unusual for Denmark, a country admired internationally for its transparency and comparatively low level of corruption.

Ms Nielsen worked at the Socialstyrelsen, the National Board of Health and Welfare. Groups like the Danish Cystic Fibrosis Association and the Danish Deaf Association were allocated funds, and it was her job to send them the money.

In 2017, she was awarded an official Silver Medal of Merit for her years of service.

But Ms Nielsen is now accused of embezzling cash, funnelling money from social projects to her account.

According to the Nordic Labour Journal, Ms Nielsen's defence argued during her trial that it was easy for her to take funds and that there were no safeguards in place to stop abuse of the system.

"It was a standing joke that you could easily add your own account number and then be off to the Bahamas," the 65-year-old reportedly told the court.