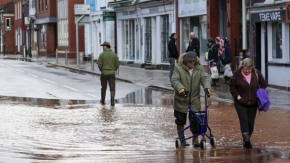 Towns near the River Severn are now the government's "greatest concern" as it tackles flooding caused by Storm Dennis, which lashed the UK with torrential rain and strong winds.

More than 200 flood warnings are in place, including three severe warnings in England.

A woman is believed to have died in floodwater in Worcestershire.

Environment Secretary George Eustice defended the government's response and said it could not protect every home.

Travel continues to be disrupted across the UK, with some A-roads closed and train lines disrupted.

The south Wales valleys saw the highest water levels for more than 40 years over the weekend, according to Jeremy Parr, head of flood and risk management at Natural Resources Wales.

Several schools have been closed and roads remain blocked by floods and landslips.

In Worcestershire, police searching for a woman who was swept away in floodwater near Tenbury Wells said it has become "a recovery rather than a rescue operation".

A relief centre for displaced residents has been set up at the high school in the town, where around 130 properties were evacuated on Sunday.

Response teams worked into the early hours of Monday morning to rescue stranded residents from their homes by boat.

The county council has warned that more evacuations could be necessary.

Thousands of sandbags have been placed around vulnerable properties nearby, but the Environment Agency has said the situation in the city is "improving".

Mr Eustice told BBC Breakfast that towns near the Severn - including Shrewsbury, Tewkesbury and Bewdley - are the government's "greatest concern", as water levels are expected to rise further.

He said the government "can't protect every home" but is stepping up spending.

Around £2.5bn has been spent on tackling extreme weather conditions since 2015 and £4bn has been allocated for the next five years, Mr Eustice said.

He said convening Cobra, the government's emergency committee, was not needed "at this point".

Meanwhile, Downing Street said Prime Minister Boris Johnson will receive "regular updates" on the flooding, which it described as "terrible".

It added that the government has deployed three miles (5km) of flood barriers, 1,000 Environment Agency Staff and the military.

A Cobra meeting was held when parts of the UK saw flooding in the run-up to the 2019 general election, and Mr Johnson visited affected areas.

The government has activated an emergency funding scheme for areas affected by the flooding, which include parts of Nottinghamshire, Leicestershire, Derbyshire, Shropshire, Telford and Wrekin, Worcestershire and Herefordshire.

Under the Bellwin scheme, local authorities can apply for the government to reimburse non-insurable costs above a certain threshold, which has not been specified.

A record number of flood warnings and alerts were issued for England on Sunday, according to John Curtin, the Environment Agency's head of floods and coastal management - reaching a combined total of 634 by 06:00 GMT on Monday.

There are also more than 50 flood warnings and alerts in Wales and more than 20 in Scotland.

On Sunday, major incidents were declared in south Wales and parts of England, as parts of the UK were buffeted by wind gusts of more than 90mph.

More than a month's worth of rain fell in 48 hours in places.