Does drill music cause crime, or offer an escape from it? 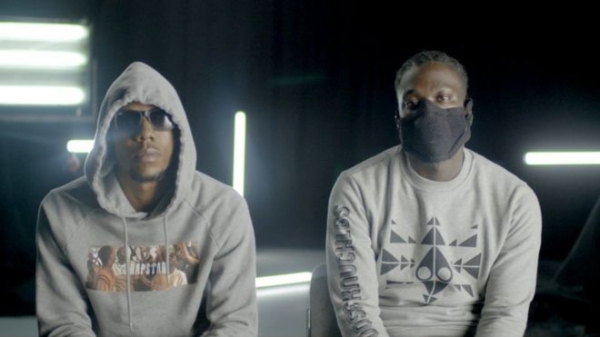 "These days if someone gets stabbed no-one really cares, unless it's the family. It's just another young person getting stabbed."

Those chilling words come from a young boy in north London, no older than 14, in a new documentary

about the links between knife crime and drill music.

He's not alone. His classmates describe intimidating encounters with gangs in balaclavas, and the fear that "saying the wrong thing" will lead to violence.

What they're less clear about is whether music, specifically the dark and gritty beats of drill, encourages criminal behaviour.

"In the songs, they talk about how they killed so much people and all that," observes one pupil.

"Violence is a choice," responds another. "Everything is a choice. You don't have to do it."

"If you think about it," adds a third classmate, "drill has caused more success for people than deaths."

A way out?
Like the students, the documentary, titled Terms and Conditions, is divided on the question of whether drill's violent lyrics are a symptom or a cause of the rise in knife-related crime.

"In this time of fake news, I wanted to show both sides," explains Andre Montgomery-Johnson, who authored the feature-length investigation.

"In a way, we ask the question, 'Does drill cause knife crime?' and the viewer makes the decision. That's the most powerful thing about it."

Montgomery-Johnson is uniquely placed to explore the issue. Under the name Mr Montgomery, he's one of the few journalists to cover drill closely from a grassroots level.

He grew up on the same streets as some of the genre's biggest names, and has lost friends of his own, including the rapper Incognito, to knife crime.

Crucially, he files his reports on YouTube - drill's natural home - giving him authenticity within the scene.

As a result, he has access to some of drill's biggest stars, going behind the scenes as they record music and shoot videos. In turn, the documentary shows "another side of these drill rappers", who have often been painted as aggressive thugs in the media.

"They have pride in what they're doing. They can articulate themselves," says Montgomery-Johnson. "We're giving them a voice to be understood."

The journalist recognises that drill, like grime before it, offers some of London's poorest residents an escape route.

"You can record a song on your phone and within 24 hours, that could potentially have a million views, which would change your whole destiny," he says.

The lyrics are often about obtaining money and status and power "because these are the things people on the streets don't have", explains rapper Drillminister (who recently launched a bid to become London's mayor) in the film.

But Montgomery-Johnson is equally aware the music can lead to problems.

"Some drill songs do make it seem like it's cool to carry a knife, so of course there's going to be consequences to that."

There were 90 fatal stabbings in London in 2019, according to the Met Police. Across the UK, there were 44,771 offences involving knives or sharp instruments between September 2018 and September 2019, a rise of 7%, figures from the Office of National Statistics show.

Police have targeted drill music in an attempt to crack down on the violence, asking YouTube to remove videos that they say incite real-world crimes.

To examine the links, Montgomery-Johnson spoke to knife crime activists, youth mentors, community leaders, police officers and, in his documentary's most moving scenes, the mothers of several victims.

'YouTube has a massive responsibility'
Among them was Sharon Kendall, whose 18-year-old son Jason Isaacs died after being ambushed by four assailants on mopeds as he walked to a friend's house in November 2017.

"The boy that killed Jason, he's in numerous YouTube videos and all they speak about is stabbing people in the back," she says.

"It's a massive thing, this drill music. I don't think it's the only cause, but it's one of the causes."

Several interviewees blame YouTube for disseminating violent videos without checks in place (a segment that's all the more striking when you learn that Terms and Conditions is being released under the YouTube Originals banner).

"They're not being mindful of the things they're allowing to be put onto their platforms," says campaigner Lucy Martindale, who developed PTSD after witnessing her cousin's murder at the age of nine.

"It's just a way of these gangs communicating with each other really violently and making threats. They need to take them [the videos] down very quickly."

"I think YouTube has a massive responsibility because, ultimately, it's a platform which they profit from," agrees Sayce Holmes-Lewis, director of youth work charity Mentivity.

"If young people are losing their lives because of content that's being put up, it needs to be screened at the earliest opportunity."

'There's even gay drill'
Rappers Skengdo and AM strenuously disagree. The duo, who've been handed suspended sentences for performing lyrics which police said incited violence against rival gang members, argue that their freedom of speech is being curtailed.

"They didn't link any crimes to our music," says AM. "It was a very weak case".

Montgomery-Johnson offers a solution to the stand-off between rappers and law enforcement - put pre-roll disclaimers on videos to discourage copycat behaviour.

"They need to have little warnings that say, 'This is not real life, this is not true, this is just entertainment - like in a film'. These are people playing a role and you shouldn't take them too serious," he says.

The idea that some drill lyrics are artfully exaggerated is reinforced by 21-year-old rapper Lavida Loca, who admits in the documentary that her "songs about violence and drugs caught everyone's attention", encouraging her to pursue that direction.

But Montgomery-Johnson points out that the genre is about more than gang culture and nihilistic violence, with an artist like Drillminister tackling climate change and economic austerity in his songs.

"Drill is only drill because of the beats. So you can create political drill, you can create property drill, there's even gay drill. The beats is the genre, but the topic can be anything."

And while the documentary deliberately avoids making a judgement on the link between drill and knife crime, you're left with the impression that it's only one pixel in a bigger picture.

"So I think, yeah man, there's more than just drill to knife crime. There's other structures that are failing our young people. That's what I learnt."