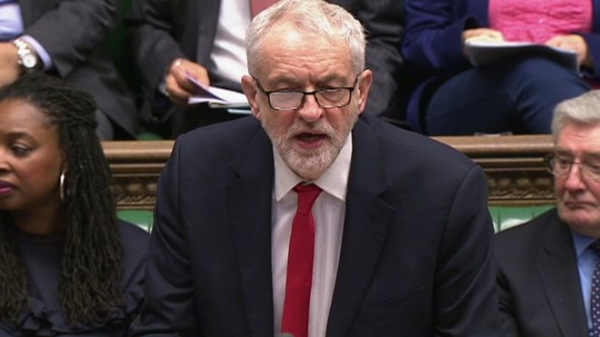 Jeremy Corbyn has launched a personal attack on Boris Johnson as the two clashed in Parliament over the deportation of foreign offenders.

The Labour leader accused the PM of misleading the country about the nature of offences committed,

saying some deportees were victims of drug gangs.

Mr Corbyn said it showed the government had "learnt absolutely nothing" from the 2018 Windrush controversy.

Mr Johnson said the Labour leader had "demeaned himself" with the claims.

The PM defended the decision to forcibly remove a group of men to Jamaica earlier this week, saying the government had acted entirely "in accordance with the law" in dealing with foreign-born offenders who had committed serious and persistent offences.

During heated exchanges at Prime Minister's Questions, Mr Corbyn referred to the Windrush controversy, in which a number of British citizens were wrongfully detained and, in some cases, deported.

'Misleading'
He asked the PM whether it was right that one of those deported this week was a black man who had come to the UK when he was five, who committed a single drugs-related offence after being groomed by "county lines" gangs but had not subsequently re-offended.

"This cruel and callous government is trying to mislead the British people into thinking that it is solely deporting foreign nationals who are guilty of murder, rape and other serious offences," he said.

"This is clearly not the case."

BBC interview splendid, says Boris
The Labour leader asked: "If there was a young white boy with blonde hair, who later dabbled in class A drugs, and conspired with a friend to beat up a journalist, would he deport that boy?

The prime minister was born in the United States, and has faced questions about past drug use.

He was asked about claims that he had taken cocaine at university by Marie Claire Magazine in 2008. He said, "that was when I was 19".

In an appearance on Have I Got News For You in 2005, he admitted being given the drug, but suggested he hadn't actually taken it: ""I think I was once given cocaine but I sneezed and so it did not go up my nose. In fact, I may have been doing icing sugar."

While he was working as a journalist in the early 1990s, Mr Johnson had a conversation with a friend , Darius Guppy, who had been demanding the private address of a News of the World journalist.

A recording of the call suggested Mr Johnson had agreed to supply the details, even though Guppy, who was later jailed for fraud, had indicated he had wanted to have the reporter, who had been investigating his affairs, beaten up.

In a BBC interview in 2013, Mr Johnson stressed that "nothing eventuated" from the conversation and that people often said "fantastical things" to close friends of theirs.

Reputation of Windrush generation
Responding to Mr Corbyn, Mr Johnson said the Labour leader had "no right to conflate" the actions of those deported this week with the mistreatment of the descendants of Windrush families who came from the Commonwealth to work in post-war Britain.

"I think quite frankly the honourable gentleman demeans himself and besmirches the reputation of the Windrush generation who came to this country to work in our public services and teach our children, to make lives better for the people of this country."

Mr Corbyn also called for Dominic Raab to be removed as foreign secretary, accusing him of misleading the family of Harry Dunn over the true identity of Anne Sacoolas, the woman suspected of causing his death by dangerous driving outside a US air base last summer.

He said it had been "widely reported" that Ms Sacoolas, whose extradition the US has rejected on grounds of diplomatic immunity, worked for the CIA while in the UK, suggesting this information had been withheld from the family.

Mr Johnson rejected this, saying the US authorities had told the Foreign Office that Ms Sacoolas had "no official role".

He pledged to continue to press the US to allow her to face justice in the UK while acknowledging the extradition treaty between the two countries was "lop-sided".