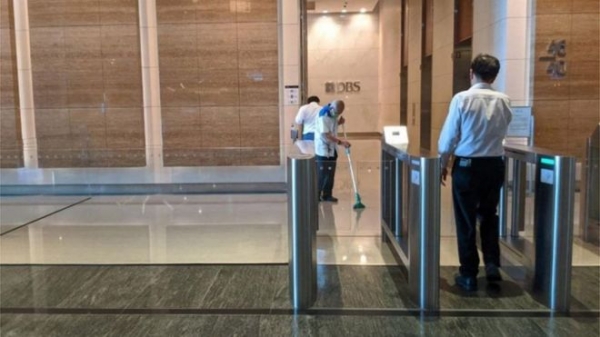 Around 300 employees have been evacuated from Singapore's biggest bank, DBS, after one person fell ill with the new coronavirus.

All 300 had been working on the same floor, the 43rd, and were sent home on Wednesday.

Singapore had previously reported 47 cases of the new virus - one of the highest tallies outside China.

Meanwhile, Formula 1's Chinese Grand Prix, due to take place in Shanghai on 19 April, has been postponed.

Motorsport governing body FIA said the measure had been taken "in order to ensure the health and safety of the travelling staff, championship participants and fans". It said it hoped to find an alternative date later in the year "should the situation improve".

The overall number of infections is more than 44,000 on mainland China, with cases in more than 20 countries.

The DBS employee was tested on Tuesday and his infection was confirmed on Wednesday.

"As a precautionary measure, all employees on the affected floor vacated the premises to work from home," the firm said in a statement.

DBS said "during this difficult time, the bank will be providing this employee and his family with every support and guidance".

Contact tracing is being done to verify who had been exposed to the affected employee. The common areas of the building in the Marina Bay Financial Centre - such as lifts and toilets - are being deep cleaned and disinfected.

Care packs with thermometers, masks and hand sanitisers were given to the evacuated employees and the bank said a medical helpline was in place.

Are cruise ships really 'floating petri dishes'?
Super-spreaders: Why are they important?
How worried should we be?
China and the virus that threatens everything
Singapore raised its "Disease Outbreak Response System Condition" to orange last week - which means the disease is severe and spreads easily from person to person.

As a consequence, all companies and many public spaces have started scanning employees and visitors for temperature.

The Covid-19, as the disease is officially called, has killed more than 1,100 people in China, where it emerged.

On Wednesday though, the country reported its lowest number of new cases in almost two weeks, with 2,015 new confirmed cases on Tuesday.

In its latest measure to try to halt the spread, China has said it will stagger the return of children to school. Several provinces have closed schools until the end of February.

From a total of more than 3,700 passengers and crew on board, almost 500 have been tested so far, but there are plans to step up testing in the next days.

While those infected are brought on land and taken into medical care, the remaining passengers have to stay in quarantine on the ship.

Another cruise ship that had been turned away from several ports including in Japan, Taiwan and Thailand - despite having no sick passengers on board - has finally got permission to dock in Cambodia.

The Westerdam, which is carrying more than 1,450 people, is now sailing for Sihanoukville where passengers will be able to disembark, owners Holland America confirmed.