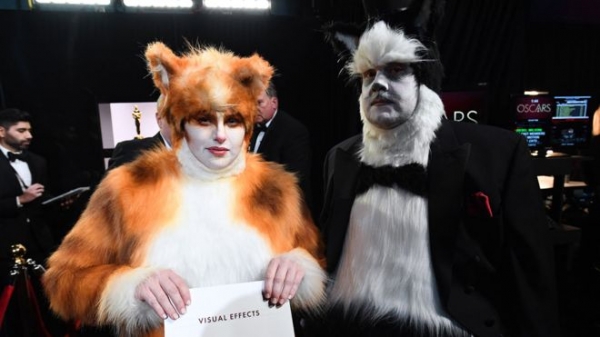 As the dust settles following Sunday's Oscars ceremony, we take a look at the latest stories to emerge from the show's embers.

Our first tail (geddit?) is about a film that was unsurprisingly overlooked by the Academy - Tom Hooper's

The audience at the Dolby Theatre purred with delight when James Corden and Rebel Wilson turned up to present an award dressed as their characters in the film.

Yet their catty jibe about the movie's much-criticised visual effects left one party feline distinctly aggrieved.

In a statement released on Monday, the Visual Effects Society said it was "immensely disappointing" that visual effects had been "the butt of a joke".

Tom Hooper's adaptation of the Andrew Lloyd Webber show is also up for eight Golden Raspberrys, awards that celebrate the year's worst films.

Cats among Razzie nominees for 2019 'worst films'
Lame opening for Cats at US and UK box office
Sunday's ceremony saw Corden and Wilson present the Oscars for best visual effects while dressed as their characters Bustopher Jones and Jennyanydots.

"As cast members of the motion picture Cats, nobody more than us understands the importance of good visual effects," they declared, before presenting the award to 1917.

Many critics found fault with Cats' effects, which were used to turn its starry cast into furry hybrids with both human and feline attributes.

Work on the film's effects continued even after its release, with updated prints being sent to cinemas after it had opened.

It followed reports that earlier prints had shown Dame Judi Dench's character with a human hand - an oversight Corden and Wilson mirrored in their Oscar costumes.

In its statement, the Visual Effects Society (VES) said the duo's skit had "suggested that bad VFX were to blame for the poor performance of the movie".

"The best visual effects in the world will not compensate for a story told badly," the society continued.

"Our artists, technicians and innovators deserve respect for their remarkable contributions... and should not be presented as the all-too-convenient scapegoat in service for a laugh."

The Academy of Motion Picture Arts and Sciences, the organisation behind the annual ceremony, has yet to respond.

Oscars organisers have also faced criticism in the wake of Sunday's ceremony for omitting the late Luke Perry from its In Memoriam segment.

Perry, who died last March aged 52, made one of his last screen appearances in Once Upon a Time in Hollywood, which won two Oscars on Sunday.

Both Conrad and Bean died just a couple of days before the ceremony.

Let it go, Idina
A blunder from the past came back to haunt the Academy during Sunday's ceremony, which drew the event's lowest live TV audience to date.

The boo-boo in question was John Travolta's notorious introduction of singer Idina Menzel in 2014 as "the one and only Adele Dazeem".

While introducing Menzel on Sunday night, her Frozen co-star Josh Gad pointedly remarked that her name was "pronounced exactly how it is spelt".

Comedian Utkarsh Ambudkar also referred to the gaffe during a re-cap rap in which he reminded "Mr Travolta" of his pronunciation aberration.

Menzel herself had got her own back long before, having introduced Travolta at the 2015 Oscars as "Glom Gazingo".

More in this category: « Oscars 2020: South Korea's Parasite makes history by winning best picture Does drill music cause crime, or offer an escape from it? »
Login to post comments
back to top