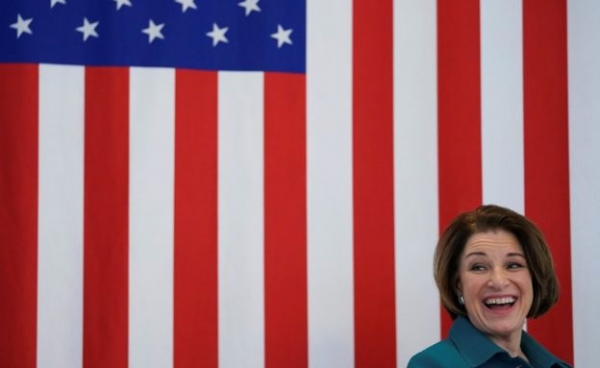 One week after the US election race began in chaotic fashion, the contest moves on to New Hampshire on Tuesday. Voters in the north-eastern state are choosing their preferred

nominees for the 2020 presidential election race in a primary contest.

Results from the first Democratic contest last week, in Iowa, were held up by technical glitches.

The aim of the primaries and caucuses is to win as many delegates as possible across all states and territories, in order to be confirmed as the candidate.

Here's what to expect in New Hampshire:

One person to watch

Joe Biden might have expected to arrive in New Hampshire in more buoyant form.

He was among the frontrunners in the opening Iowa caucuses last Monday but in the end, he lagged well behind. The former vice-president claimed fewer delegates than rivals Mr Sanders, Pete Buttigieg and Elizabeth Warren.

Realistically, it's a competition for third place between Mr Biden and Ms Warren in New Hampshire. A poor performance there could put them both on the back foot only two states into primary season, and it's unusual (though not unprecedented) for someone to win the candidacy from such a position.

But it's not all bad news for Mr Biden - he is more popular in states that are more diverse than Iowa and New Hampshire, and the next two contests are in states with large Latino and African-American populations, Nevada and South Carolina.

One piece of context
New Hampshire's contest is not like Iowa's - these are primaries, not caucuses like in Iowa. The difference? Caucuses are a convoluted process, where people gather for a few hours for a party meeting and vote publicly in stages. They require quite a bit of commitment.

Big questions as candidates spar in New Hampshire
A state divided by impeachment
Primary voters, on the other hand, can just turn up at a polling booth and vote in secret. Then leave. As a result, participation will be much higher.

And because primary voters make their choice using pencil and paper, there should be none of the technical headaches we saw in Iowa.

One big question
Is Bernie Sanders electable? We asked two voters in New Hampshire - the daughter is a big Bernie fan, the father a lapsed supporter.

One bit of trivia

As you're reading this, some voters have already cast their ballot.

Quirks of the New Hampshire electoral system mean that places with a certain number of residents can vote when they like - including the middle of the night.

So the residents of three hamlets - including Dixville Notch, near the Canadian border - started casting their ballots after midnight, as is traditional.

"We take this seriously," Tom Tillotson, a Dixville Notch resident overseeing the vote, told Agence France-Presse, adding: "We were humbled and honoured to be... basically the starting gun for the primary election process."

Until recently, Dixville Notch had only four residents, which would not have been enough for it to vote early. Then one resident decided to move back, and everything was OK again.

Mr Bloomberg, who earlier said he would skip contests in early states, received three of the five votes cast as a "write in" candidate - someone whose name was not initially on the ballot, but was added by voters.

'Write in' candidates: A quirk of the US election system
Mr Sanders and Mr Buttigieg received one vote each.

For some of the candidates already trailing at the bottom of the pack, it could all come down to what happens in New Hampshire.

There are still 11 Democratic candidates running, and while plenty could still happen during primary season, a poor performance could spell the beginning of the end (or even the end of the end) for the likes of Deval Patrick, Tulsi Gabbard and Andrew Yang, three weeks before 14 states vote on Super Tuesday.

The strange symbol on one candidate's hand
Is this the start of a Bernie boom?
One outsider who is staking a lot on New Hampshire is Michael Bennet - the Colorado senator has held 50 town hall meetings in the state in the past two months.

"We're hoping to propel Michael from New Hampshire into Super Tuesday," his spokeswoman Shannon Beckham told the Denver Post last week, citing growing crowds. But Mr Bennet, a moderate, has struggled to get his campaign off the ground in a crowded field.

One quote
"We have a newcomer in the White House, and look where it got us. I think having some experience is a good thing."

Minnesota senator Amy Klobuchar was one of many candidates to take aim at Mr Buttigieg at a debate in New Hampshire on Friday night, four days after he performed more strongly than expected in Iowa.

His status sits somewhere between the man to beat and the new kid on the block. His rivals are now testing out lines of attack against him - one of the main ones being that his experience (as the mayor of a smallish city in Indiana) isn't enough to prepare him for the presidency.

But, as the BBC's Anthony Zurcher reports, Mayor Pete may well appeal to New Hampshire's many independent voters. A good showing there could put him in the driving seat for the Democratic nomination.

More in this category: « US 2020: Buttigieg responds to Biden advert Sharp rise in brain injuries from Iran raid on US base »
Login to post comments
back to top