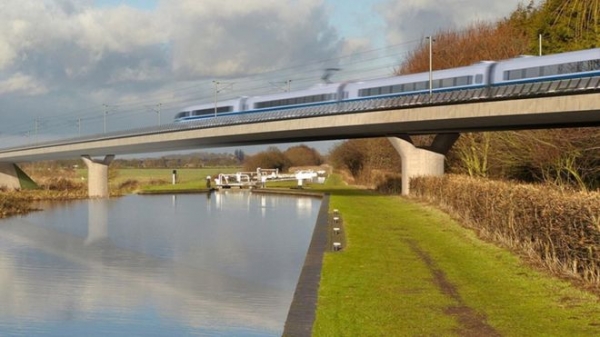 Prime Minister Boris Johnson has announced that the controversial HS2 high-speed rail link will be built.

The first phase of the route will travel between London and Birmingham, with a second phase going to

"It has been a controversial and difficult decision," Mr Johnson said.

The prime minister added he was going to appoint a full-time minister to oversee the project and criticised the HS2 company's management of the scheme.

"I cannot say that HS2 limited has distinguished itself in the handling of local communities. The cost forecasts have exploded, but poor management to date has not detracted from the fundamental value of the project."

The prime minister added that a series of measures will be taken to "restore discipline to the programme".

The first phase of the high-speed rail link between London and Birmingham was due to open at the end of 2026.

But Transport Secretary Grant Shapps told MPs in September that the first trains may not run on the route until some time between 2028 and 2031.

However, Mr Johnson told MPs that he hoped if work started immediately that trains "could be running by the end of the decade".

The cost set out in the 2015 Budget was set at just under £56bn, but the independent Oakervee review has said it could cost more than £100bn.

Mr Johnson added: "We will, in line with the review, investigate the current costs to identify where savings can be made in phase one without a total redesign."

"The Labour Party supports HS2 as a means to boost regional economies and slash climate emissions. It is essential for boosting rail capacity and freeing up other lines," he said.

"But we don't see why the government should get a slap on the back for announcing it is going ahead.

"After all, it's only because of the abject failure of successive Conservative governments to keep on top of the costs that the project's future was in any doubt."

Matthew Fell, of UK employers' group the CBI, said the decision to back HS2 was "exactly the sort of bold, decisive action required to inject confidence in the economy".

He added: "It sends the right signal around the world that the UK is open for business. HS2 shows the government's commitment to levelling up the nations and regions of the UK."

Stephen Phipson, chief executive of manufacturers' organisation Make UK, said: "Industry will applaud this bold, sensible and pragmatic decision which will help change the country for the better.

"Government now has a once in a generation opportunity to develop a fully integrated transport plan for the whole country which it should grab with both hands."