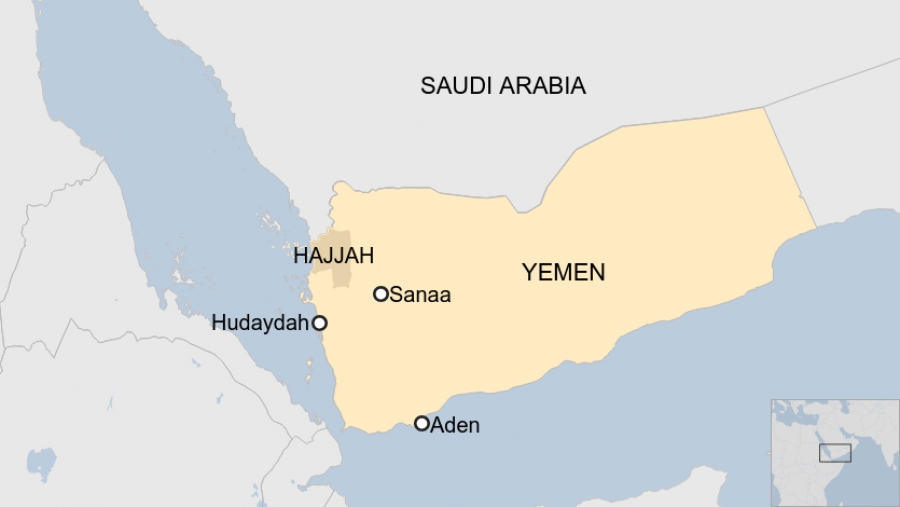 A crisis within the world's greatest humanitarian emergency could be reaching breaking point over the control of lifesaving aid millions of Yemenis need to survive.

Major donors and some of the world's biggest aid agencies will meet in Brussels on Thursday in an effort to forge a collective response to what is being widely described as unprecedented and unacceptable obstruction by Houthi authorities who hold sway over large swathes of northern Yemen.

The lives of millions of Yemenis depend on it. A recent Yemen briefing to the UN Security Council underlined that access constraints were affecting 6.7 million Yemenis who needed assistance - a figure which it noted has "never been so high."

"Humanitarian agencies must operate in an environment where they can uphold humanitarian principles," says Lise Grande, the UN's Resident Humanitarian Coordinator in Yemen.

"If we reach a point where the operating environment doesn't allow us to do that, we do everything we can to change it."

Even at this eleventh hour, discussions are continuing with senior Houthi officials to find a way forward.

Months of meetings, a succession of envoys despatched to the capital Sanaa, and a series of statements to the UN Security Council have failed to resolve a catalogue of complaints ranging from delays in permits to harassment and detention of staff. One aid official expressed concern over an "extremely hostile environment".

Concern spiked when a levy on every aid agency was proposed, amounting to 2% of operational budgets, by the body established by the Houthis in November to exert greater control over aid, known as the Supreme Council for the Management and Co-ordination of Humanitarian Affairs (SCMCHA).

"This is huge," explains one aid official who, like most agencies operating in Yemen, did not wish to speak on the record given the acute sensitivity of these issues. "It could be seen as financing the war."

"We informed them that if we work together towards a common goal to help people in need then we will not disagree, but not if they bring in political considerations," he tells me when we meet in Sanaa, where Houthi rebels, officially known as Ansar Allah, have been in charge since 2014. His words underscore an atmosphere often clouded by suspicion and criticism of major western aid agencies and their spending priorities.

As for the tax, he explains "there should be nothing wrong with providing funds which enable us to co-ordinate aid when we're suffering from a blockade" - a reference to restrictions imposed on air and sea ports by the Saudi-led coalition battling the Houthis, who are aligned to Iran. He then hastens to add the tax is still only a proposal.

We're surrounded by towering stacks of boxes in a vast warehouse at Sanaa International Airport, a spot chosen by Mr Assal to make his point as forcefully as possible.

"When this aid comes, like these expired medicines or spoilt food, we stop this aid so we don't make Yemenis sick, or add to the tragedy," he says, pointing to medicine belonging to an international medical charity.

When I point out that the pallet next to us has an expiry date of June 2020, he explains that by the time the required paperwork is complete, and distribution underway, they will no longer be fit for purpose.

Some governments have been reluctant to take drastic steps, worried it could adversely affect embryonic efforts to bring an end to Yemen's devastating war which now encompass secret talks between senior Saudi and Houthi officials.

But major donors are reported to be increasingly uneasy over perceived compromises to humanitarian principles including misuse of tax payers' money.

There is double jeopardy in a country where aid is a lifeline for 80% of the population. "I'm losing sleep over this," one official confesses. "Can we walk away from millions of people who, without aid, could easily slip into famine?"

The stakes are so high, the emphasis at this week's meeting will be on agreeing a unified response with possible options including a scaling back or suspension of aid programmes. "The UK is urging the UN to lead on a plan - alongside other donors - for how we can all adjust how we give aid to ensure it gets to those in need," a spokesperson for the UK's Department of International Development (DFID) tells me.

"We may have to go in a different direction for a little while until we can get those conditions back in place. That's our responsibility," comments Lise Grande, who plays a leading role in constant discussions with senior Houthi officials to protect a programme which reaches more than 14 million people. "We are committed to find ways to co-operate."

Aid agencies also express concern about new and growing impediments in southern Yemen, which is controlled by the coalition-backed government. But the constraints are still on a far less significant scale.

On a visit to the north-western province of Hajjah, one of the areas worst affected by war, disease and displacement, we're invited by another senior Houthi official to see one of their key exhibits in this stand-off.

"When you see worms and insects in these bags, is this edible for humans? "angrily demands Alaan Fadayil, the senior SCMCHA official in Hajjah, as he rips open a sack of wheat flour.

In this warehouse, we're shown swarms of insects scurrying from bags imprinted with the blue logo of the UN's World Food Programme. The WFP admits that a very small percentage of food - in its biggest operation anywhere in the world - can go bad and they have ways to dispose of it. But it also underlines that it's been seeking permits for many months to distribute this flour.

From there, we're taken to a much bigger storage facility a short distance away.

Its soaring steel gate is tightly locked with two bulky industrial padlocks. But Mr Fadayil, defiantly positioned at this entrance in his sharp blue suit, insists the keys are on their way.

We notice the upper half of this storage facility is painted in the UN's distinctive turquoise blue and realise this is where the UN recently said its red line was crossed after some of its grain supplies were looted.

"The quantity taken out of this warehouse was done with the authority of the attorney-general to distribute some of it to people who are suffering," Mr Fadayil explains, brandishing a sheaf of documents with official stamps.

Last year, the WFP suspended food aid for three months in one neighbourhood of Sanaa - an urban community where it was hoped the impact could be contained. That move was provoked by disagreements over a new biometric system intended to ensure aid reached those in greatest need amid charges that food was being diverted, including to Houthi fighters.

The pause led to some progress on moving forward with the new system.

"We suffered a lot, a lot," one resident tells us when we visit the neighbourhood. Leaning on a metal crutch, he sighs "we really hope they don't stop aid again," as a crowd grows around us, all wondering and worrying over what could happen next.