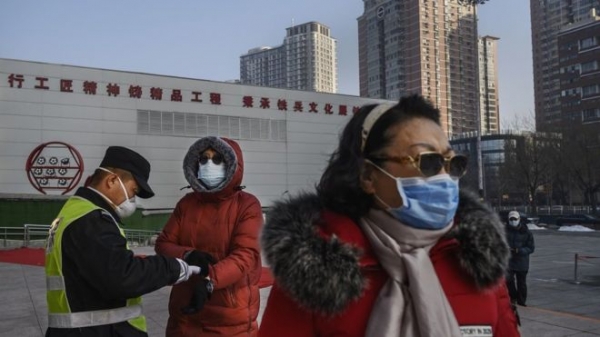 China has "removed" several senior officials over their handling of the coronavirus outbreak - as the death toll passed 1,000.

The party secretary for the Hubei Health Commission, and the head of the commission, were among those who lost their jobs.

They are the most senior officials to be demoted so far.

The deputy director of the local Red Cross was also removed for "dereliction of duty" over "handling of donations".

The two Hubei party officials will be replaced by a national figure - the deputy director of China's National Health Commission, Wang Hesheng.

On Monday, some 103 died in Hubei province alone, a daily record, and the national death toll is now 1,016.

Speaking to Reuters news agency, leading Chinese respiratory expert Zhong Nanshan said the virus was hitting a peak in China this month and that the outbreak may be over by April.

He said he was basing the forecast on mathematical modelling, recent events and government action. How

According to state media, there have been hundreds of sackings, investigations and warnings across Hubei and other provinces during the outbreak.

But removal from a certain role - while regarded as a censure - does not always mean the person will be sacked entirely, as it can also mean demotion.

As well as being removed from their posts, officials can also be punished by the ruling Communist Party.

For example, the deputy head of the government-run Red Cross charity, Zhang Qin, was given "a serious intra-Party warning as well as a serious administrative demerit", state media said.

Earlier this month, the deputy head of the Wuhan bureau of statistics was removed, with similar sanctions for "violating relevant regulations to distribute face masks".

Coronavirus super-spreaders: Why are they important?
How worried should we be?
British coronavirus patient recovers from illness
Coronavirus: Nissan to shut factory in Japan
In recent days, Chinese authorities have increasingly been criticised for their handling of the crisis.

The death of a doctor whose early warnings were suppressed by authorities sparked widespread public anger.

Beijing has sent a team from its highest anti-corruption agency to Hubei to investigate the treatment of Dr Li by police.

'It was only a question of who and when'
Analysis by BBC China correspondent, Stephen McDonell, Beijing

Somebody was always going to be for the chop following the shambolic early handling of the coronavirus emergency.

That early response cost precious weeks, slowing the response while millions of people left Wuhan before the transport blockade was in place.

It was only a question of who would go - and when.

With the local authorities facing a storm of public anger, the top two officials in Hubei's provincial health commission have been dismissed. Nobody expects it to end there.

Possibly sensing that his own head was already on the block, the mayor of Wuhan, Zhou Xianwang, said the reason it took so long to warn the public about the virus was that he didn't have clearance from above.

Clearance from above? That could mean permission from the provincial party secretary. It could also be interpreted that he was directing the blame all the way to Beijing.

Now that can mean either China's top leaders are partly at fault; or the Communist Party's governance structures need to be overhauled; or the mayor is wrong - that is, he is the one who ultimately should carry the blame.

People can decide which of these options is most likely to be acknowledged and acted upon.

What's the latest in China?
There are now more than 42,200 confirmed cases across China. The number of deaths has overtaken that of the Sars epidemic in 2003.

More than three-quarters of the deaths have been in Hubei's provincial capital, Wuhan, the centre of the outbreak. The city of 11 million has been in lockdown for weeks.

China has been sending large numbers of medical staff to the city. State news agency Xinhua shared images on Monday of doctors and nurses shaving their heads to prepare for wearing protective clothing.

However, health officials have warned that medical facilities in rural areas across the country are inadequate.

In Hong Kong, 23 households were evacuated from an estate on Monday night and taken into quarantine, after cases were detected there.

The territory has had months of protests and chief executive Carrie Lam has called for "social cohesion" in the face of the health crisis.

What about the rest of the world?
Two Japanese citizens who were evacuated on government-chartered flights from Wuhan in January have now tested positive. Both men had previously tested negative for the virus but later displayed symptoms, according to media reports.

The Diamond Princess cruise ship remains quarantined in Japan's port of Yokohama, with 135 cases confirmed among the 3,700 passengers and crew.

Thailand on Tuesday did not allow passengers from another cruise ship to disembark, despite no confirmed infections aboard.

North Korea is reported to have sent hundreds of workers to patrol its borders with China. Road, rail and air links with China have already been cut.

The country has not reported any infections but South Korean media say the virus has reached the secretive communist state.

What are the symptoms of coronavirus and what can help stop its spread?
The main signs of infection are fever (high temperature) and a cough as well as shortness of breath and breathing difficulties.

Frequent hand washing with soap or gel, avoiding close contact with people who are ill and not touching your eyes, nose and mouth with unwashed hands, can help cut the risk of infection.

More in this category: « Coronavirus claims 97 lives in one day - but number of infections stabilises Bernie Sanders wins New Hampshire primary ahead of Pete Buttigieg »
Login to post comments
back to top