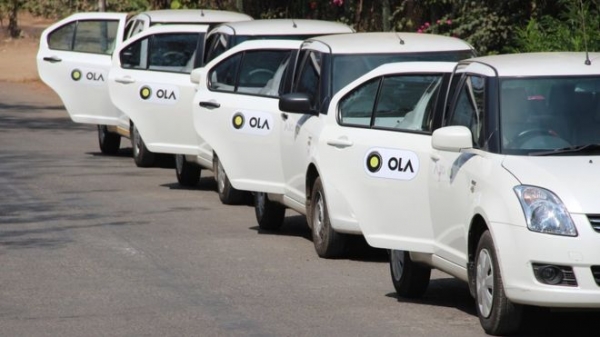 The UK's taxi app market has stepped up a gear with the launch of Indian firm Ola's services in London.

The ride-hailing company began operating in Cardiff in 2018 and has since spread to other UK locations.

It has its sights trained on US-based rival Uber, which is appealing against a decision to end its London licence following repeated safety failures.

But one expert sees the sector as a "winner-take-all" market that can only be profitable as a monopoly business.

Ola says it already has three million customers across the UK and hopes to be number one in London within a year.

However, it is not the only challenger to have moved in since Transport for London (TfL) said Uber was "not fit and proper" to be a licence holder.

So what are Ola's chances of knocking out its competitors? And how does it compare with other services?

What is the state of the market?
Ola's services in London began on Monday and its licence will initially run until the end of 2020.

It already offers its services in large parts of the country, including seven big UK towns and cities: Bath, Birmingham, Bristol, Cardiff, Exeter, Liverpool and Reading.

Across the UK, there are now about a dozen app-based ways to book a cab.

Some work with traditional licensed taxi drivers and are merely an alternative to making a phone call. But the majority are hoping to displace Uber by building their own networks of drivers.

Uber is still operating in London after appealing against the decision not to renew its licence.

But however bleak its long-term prospects may seem, it still has the advantage of brand recognition - and it still has more registered drivers in London than any of its rivals.

What does Ola say?
Ola's head of international, Simon Smith, told the BBC: "We are confident that we can become the market leader in London within a year."

He said the number of Londoners who had downloaded the firm's app so far was "in six figures" and stressed that Ola was "very much focused on safety and reliability".

"It's in our DNA to always follow the law, whether that's in Birmingham, Brisbane or Bangalore," he added.

Mr Smith said Ola aimed to cover the whole of the UK: "The only limit on the pace of our expansion in the UK is how quickly we can get the relevant licences."

And what makes it so hopeful?
The Indian firm is clearly striving to learn from the experience of Uber, which was upbraided for failing to screen its drivers properly, potentially putting passengers at risk.

Ola has announced a raft of safety features, including one that traces a driver's route and flags up any "irregular vehicle activity". The app also has a "panic button" that users can push if anything goes wrong.

The firm also bars drivers who have more than six penalty points on their licence.

And it is making an effort to fix the brand recognition problem too, with a lavish advertising campaign.

What do analysts think?
Transport commentator Christian Wolmar is deeply sceptical about the entire ride-hailing sector, which he believes has an unsustainable business model.

He told the BBC that Ola, Uber and other such firms offered little that was not already provided by existing minicab firms or licensed taxi drivers.

"They have flooded the market, spending vast amounts of money, and the only way they can win is to create a monopoly that allows them to control the price," he said.

"Clearly, that's their strategy - to wipe out the competition."

Mr Wolmar compared the current free-for-all in the ride-hailing market to the deregulation of UK buses in the 1980s, which saw the brief rise of small operators such as "Mr Bloggs running buses down Sheffield High Street".

But in the end, he said, the small operators were all bought up by bigger firms who "carved out" local monopolies.

Ride-hailing services were popular with young people because they were cheap, he said. "But that can't last."

More in this category: « Coronavirus hits Nintendo Switch supplies to Japan HS2: Boris Johnson makes 'controversial and difficult decision' to go ahead »
Login to post comments
back to top