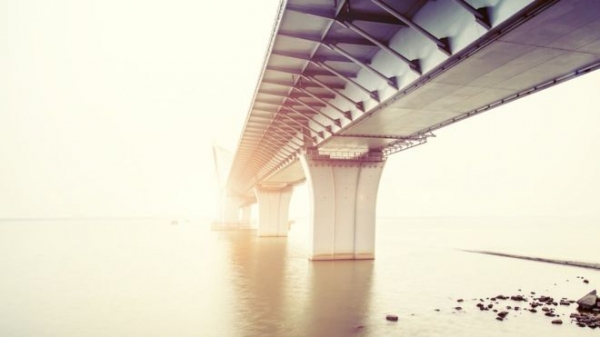 Work is under way "by a range of government officials" to look at the idea of building a Scotland-Northern Ireland bridge, Number 10 has said.

Boris Johnson has described the bridge as a "very interesting idea", while Ireland's premier Leo Varadkar

has said it was "worth examining".

But Labour's Luke Pollard said the project was "a distraction".

Two routes have previously been floated - from Portpatrick to Larne or near Campbeltown to the Antrim coast.

The Portpatrick route would be more than 20 miles across the Irish Sea.

Scotland-Northern Ireland bridge 'worth examining'
The prime minister's spokesperson said: "The prime minister has said it would have some merit - as a result you would expect government to be looking into it.

"Work is under way by a range of government officials."

However shadow environment secretary Mr Pollard accused Mr Johnson of being "a master of distraction" adding "every moment spent talking about a bridge no one wants, is airtime not spent focusing on the crises right in front of us".

Critics think it's mad. And it certainly won't be easy.

The cost could be more than £20bn and the Irish Sea isn't the most hospitable terrain for a major infrastructure project - Beaufort's Dyke is littered with munitions dumped after World War II.

Leading architects - however - have said it would be possible.

And Boris Johnson is taking it seriously - having made it clear he is keen on the idea.

Officials are looking at feasibility at the moment and reporting directly to Number 10.

I'm told we should find out later this year if there's any prospect of this moving forward. If engineering challenges can be overcome - then cost will be important too.

But it's worth remembering Boris Johnson's track record on ambitious bridge projects is a troubled one.

As London Mayor - he backed a Garden Bridge over the Thames.

It was cancelled by Sadiq Khan because of the financial risk - but still cost around £53m.

How much could a Scotland-Northern Ireland bridge cost?

At that time it estimated the cost of the scheme would be about £3.5bn.

However, by last year the suggested price tag had risen considerably.

Some experts have suggested £15bn might be required for the project but others have said that £20bn would be a "conservative estimate".