US 2020: Buttigieg responds to Biden advert 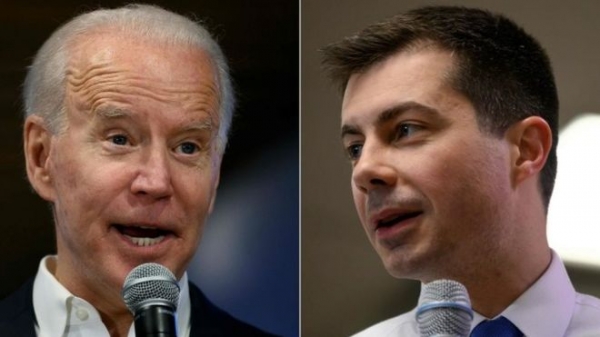 The battle between US Democratic presidential hopefuls Pete Buttigieg and Joe Biden has heated up this weekend following the chaos of last week's Iowa caucus.

Appearing on ABC's This Week, the two candidates continued to attack each other's record.

The first primary of the election begins in New Hampshire on Tuesday.

Why now?
Mr Biden's new campaign video, which has been viewed four million times since it was posted on Twitter on Saturday, launched a scathing attack on Mr Buttigieg, comparing his own achievements as vice-president to his opponent's record as mayor of the city of South Bend.

The video claimed that Mr Buttigieg had fired a black police chief and forced out a black fire chief during his time as mayor.

"The vice president's decision to run this ad speaks more to where he currently stands in this race than it does about Pete's perspective as a mayor and veteran," Mr Buttigieg's national press secretary responded.

Asked in an interview with ABC News on Sunday if he thought Mr Buttigieg had "a race problem", Mr Biden replied: "No, I'm saying he hasn't been able to unify the black community, that's what I'm saying."

"Let's get something straight here," Mr Biden said. "I didn't attack Pete. Pete's been attacking me. He's been saying the reason we're in the problem we're in now is because of the recent past. That's 8 years of Obama and me. I don't get that."

Buttigieg, however, responded defiantly in a separate interview with ABC.

When told that former Vice-President Biden's position appeared to essentially be that Buttigieg "is no Barack Obama", the former mayor responded: "Well he's right, I'm not Barack Obama, and neither is he. Neither is anyone running for president right now. And this isn't 2008, it's 2020, and this election is about where our country is headed next."

He responded to Biden's argument about the importance of winning the support of black voters by saying: "I'm going to have to work to earn that vote, just as I did in South Bend."

"We need to have a systemic vision for dismantling systemic racism," he went on to say.

Asked about Mr Buttigieg's supporters, she told ABC: "The coalition of billionaires is not exactly what's going carry us over the top."

Speaking on Saturday at a dinner in Manchester - the state's largest city - Ms Warren said she is "not running a race that has been shaped by a bunch of consultants.

"I'm not offering a bunch of proposals that have been carefully designed not to offend big donors."

Senator Bernie Sanders criticised Mr Buttigieg on Sunday, telling an audience in Plymouth that he was taking money from "40 billionaires".

In response, Mr Buttigieg told CNN that Mr Sanders, who is also a former small town mayor, is "pretty rich. And I would happily accept a contribution from him".

There are now fewer than a dozen candidates left in the race to become the Democratic nominee for the 3 November presidential election.

The party's official nominee is announced in July during the Democratic National Convention, although a clear frontrunner usually emerges before this.

What else is happening in New Hampshire?
Mr Trump and Vice-President Mike Pence are holding a campaign rally in Manchester only hours before polls open on Tuesday.

Supporters have been camped outside the venue in near-freezing temperatures since Sunday morning - 36 hours before it is due to begin - according to the New Hampshire Union-Leader newspaper.

Senator Bernie Sanders, who is from the neighbouring state of Vermont, has been leading in the polls in New Hampshire.

He will be holding a rally in Durham on Monday night with rock band The Strokes and progressive New York City congresswoman Alexandria Ocasio-Cortez.

More in this category: « Mississippi fire: Mother and six children killed in house blaze US election 2020: Focus switches to New Hampshire primary »
Login to post comments
back to top