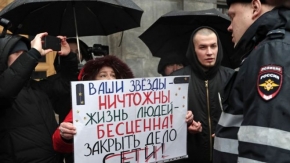 Seven Russian anarchists and anti-fascist activists have been handed lengthy jail terms on terror charges. A court in the city of Penza sentenced the men

- said to be part of a group known as Set, meaning Network - to between six and 18 years in penal colonies.

Russian authorities say they were plotting to overthrow the government.

But rights groups and lawyers say the charges were fabricated, and the men were tortured into confessing.

Prominent opposition figure Alexei Navalny described the sentences as "horrific" in a tweet, and called the Set group a "fictitious terrorist organisation".

A spokesman for Russian President Vladimir Putin reportedly said he was aware of the case and had ordered authorities "to make sure everything is in line with the law", but would not intervene.

What happened in court?
The military court in Penza, a city 630 km (390 miles) southeast of Moscow, handed down the sentences on Monday.

Pchelinstev received the longest sentence after being convicted of creating the Network. The 27-year-old was handed an 18-year term, while the other six will serve between six and 16 years and were convicted of a variety of other offences, including illegal possession of weapons.

When the judge of the military court finished reading the verdict, a crowd of the defendants' supporters shouted "Shame on you!" and "How will you be able to live with yourselves?" as the three magistrates were leaving the courtroom.

When the crowd chanted "We are with you!" Dmitry Pchelintsev, who is convicted of creating the organisation and who received the longest sentence, replied: "We are with you, too!"

All of the defendants insist that the Set organisation is pure fantasy, created by state security agency the FSB through falsifying evidence. They admit that they belong to the same social circles and share music tastes, anti-Nazi, left-wing political views and have been on weekends away playing airsoft. Yet several of them have not even met before the arrest.

Some of them also say that they have been forced to sign admissions of guilt under torture. Pchelintsev has said that he had marks on his body from electrocution and has asked for medical expertise to record them but was denied.

The FSB has said there was no violence applied to the defendants during questioning.

Who are the men?
The seven are part of a group of at least 10 in Penza and St Petersburg arrested and charged with membership of the so-called Set group. Human rights groups and lawyers say the group does not exist.

The first arrests took place in October 2017. Authorities said the men were plotting attacks on 2018 World Cup venues and before the presidential election that year.

Russia's reluctant teen activist
Couple filmed at Russia protest may lose children
Though the men describe themselves as anarchists and anti-fascists, they deny being part of any organisation. They have played airsoft together in the past - a team shooting sport using small plastic pellets - which Russian authorities said were training for attacks.

Before the sentences, a spokeswoman for Amnesty International called the terror charges "a figment of the Russian security services' imagination that was fabricated in an attempt to silence these activists".

All seven men convicted in Penza can appeal against their convictions, the judge reportedly said.

More in this category: « Germany AfD-backed leader could get €93,000 for day's work Annegret Kramp-Karrenbauer: Favourite to replace Merkel stands down »
Login to post comments
back to top