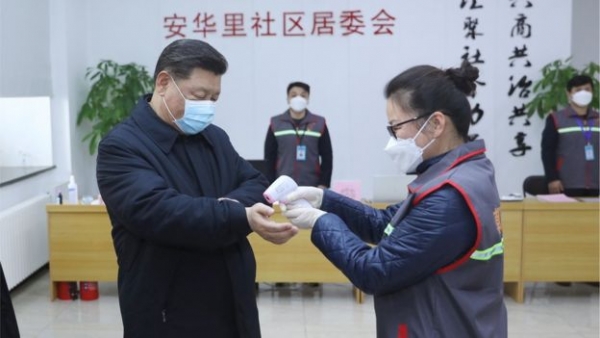 The number of people killed by the new coronavirus rose by 97 on Sunday, the highest number of casualties in a day.

The total number of deaths in China is now 908 - but the number of newly-infected people per day has stabilised.

Meanwhile, 60 more people have tested positive on a cruise ship quarantined in Japan - meaning 130 out of 3,700 passengers have caught the virus.

Dozens more catch virus on quarantined cruise ship
Coronavirus 'imminent threat' to public health
The Diamond Princess ship is on a two-week quarantine off Yokohama, after a passenger - who earlier disembarked in Hong Kong - tested positive.

The infected passengers are taken off board and treated in nearby hospitals.

The new cases mean around a third of all coronavirus patients outside of China were on the Diamond Princess.

According to Chinese data, 3,281 patients have been cured and discharged from hospital.

On Monday, millions of people returned to work after the Lunar New Year break, which was extended from 31 January to curb the spread of the virus.

But precautionary measures remain in place, including the staggering of working hours, and the selective reopening of workplaces.

Chinese president Xi Jinping visited a local hospital in Beijing that offers treatment to coronavirus patients. He also took part in a video chat with medical workers in Wuhan, the epicentre of the outbreak.

Images from state media show Mr Xi wearing a mask and having his temperature checked. The president has largely stayed away from public view during the outbreak.

"We must have confidence that we will eventually win this battle against the epidemic," he told staff at Ditan hospital in Beijing.

Over the weekend, the number of coronavirus deaths overtook that of the Sars epidemic in 2003 which also originated in China and killed 774 people worldwide.

The WHO on Saturday said the number of new cases in China was "stabilising" - but warned it was too early to say if the virus had peaked.

On Sunday evening, the organisation sent an international mission to help coordinate a response to the outbreak.

It has spread to at least 27 other countries and territories, but so far there have only been two deaths outside of mainland China, in the Philippines and Hong Kong.

In the UK, the number of people infected by the coronavirus doubled to eight after four more people tested positive for the virus on Monday.

The Department of Health has described the coronavirus as a "serious and imminent threat" to public health. The government has issued new powers in England to keep people in quarantine to stop the virus spreading. Under these measures, people who have contracted the virus will be forcibly quarantined and not allowed to leave.

The director-general of the WHO on Sunday warned that the virus being transmitted by people who have not been to China could be the "tip of the iceberg".

"There've been some concerning instances of onward 2019nCoV spread from people with no travel history to China," Tedros Adhanom Ghebreyesus wrote on Twitter

"The detection of a small number of cases may indicate more widespread transmission in other countries; in short, we may only be seeing the tip of the iceberg."

Meanwhile in Hong Kong, police are searching for two people who absconded from quarantine, the South China Morning Post reports. Nearly 1,200 people are in quarantine in the region.