At last, Iowa results. So who won and lost? 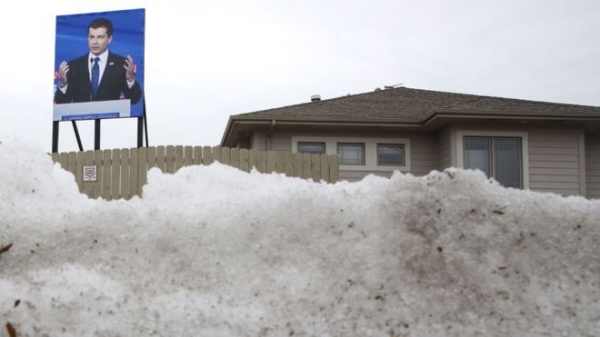 he Iowa caucuses used to be viewed as messy but endearing. Now they're just a mess. Three days after Democrats across the state gathered to vote for,

and haggle over, their preferred presidential nominee, results are in - but the dust still hasn't fully settled.

Time waits for no one, however - even the Iowa Democratic Party - and the candidates have moved on to New Hampshire, where they will debate on Friday night and stand in the first-in-the-nation primary on Tuesday.

With 100% of precincts reporting, Pete Buttigieg was declared the winner - but barely. He and Bernie Sanders were neck and neck, separated by just 0.1% – followed by Elizabeth Warren, Joe Biden and Amy Klobuchar. And the Democratic National chairman is calling for a review of the vote totals.

Still, some candidates have reason to celebrate, some will be relieved - but all have cause for a bit of concern, if not more.

Here's a look at the biggest winners and losers that have emerged from the Iowa chaos.

He may end up the biggest winner among the Democrats even if he didn't, you know, actually win the caucuses. If early polls are any indication, he seems to be getting the biggest post-Iowa bump in New Hampshire - and momentum is really what Iowa is all about.

Pause for a moment to think about what a 38-year-old, openly gay former mayor of the fourth-largest city in Indiana just accomplished. A year ago, few had heard of him - or knew how to pronounce his last name. Now he's going to finish ahead of a two-term vice-president and several popular senators.

Now unpause. Buttigieg still seems to be getting close to no support from black voters, who form up a sizable contingent in the states that come after New Hampshire (60% in South Carolina, for example). Unless that changes, all the success in Iowa and, perhaps, New Hampshire won't amount to a proverbial hill of beans when it comes to winning the Democratic nomination.

The Vermont senator narrowly lost in Iowa against Hillary Clinton in 2016. Here he is again, with yet another razor-close result. But he won the state's popular vote, giving him grounds for claiming at least a partial victory. Beating fellow liberal Elizabeth Warren also bodes well in the states to come.

All you need to know about the presidential race
The Sanders camp should be concerned, however, that the turnout in Iowa ended up being at or below 2016 levels. For a campaign whose argument for being the nominee is that they'll ride to victory in November by bringing in a wave of new voters, that's not an encouraging development.

While the Democrats bickered among themselves and seemingly moved farther away from determining a nominee, the president stood to the side and smiled, waving a copy of a newspaper with "acquitted" as its headline.

Four numbers that explain why Trump was cleared
Which countries love Trump the most and least?
There's still plenty of time for the Democrats to get their act together, but first impressions matter - and the picture the Iowa result has painted is of a party not ready for prime-time. With his poll numbers ticking up, at least temporarily, campaign coffers filled to the brink, the economy still humming and impeachment behind him, the president is having a very good week.

The former vice-president came into Monday thinking he might have a chance to win Iowa. While it was never a state he would dominate, he shifted time and resources there in an attempt to secure a finish that could weaken his liberal opponents and perhaps knock some more of the moderates out of the race.

Instead, a distant fourth-place finish has raised all sorts of doubts about the viability of his campaign. Biden is the candidate who has made electability the central focus of his campaign. How electable is a guy who can't beat the former mayor of a modest-sized Indiana city or two senators forced to sit on their hands during the president's impeachment trial in Washington for most of the two weeks before the caucuses?

While his post-New Hampshire firewall in the form of support from black and older voters still appears intact, he may not have the kind of campaign cash necessary to mount an extensive campaign in the upcoming states.

Meanwhile, Michael Bloomberg - perhaps the heir apparent to Biden's moderate, establishment voters - waits in the wings, adding a few more zeros to the amount he is spending to campaign in the biggest states ahead.

While both these candidates may have moderately exceeded expectations, neither did enough to fundamentally change the dynamics of the race. Given all the time and resources they poured into the Iowa, "just surviving" isn't the payoff they hoped for.

Klobuchar is probably the worse off of the two, if only because she has less cash on hand. New Hampshire could be the end of the road for her. Warren has the organisation to keep going, but unless Sanders stumbles - or she finds a way to expand her appeal beyond the progressive left - it's hard to see where she starts posting wins. She's going to need some magic in Friday night's debate.

It's hard to imagine a more devastatingly bad performance by the state that takes pride in its role as the starting gate for presidential campaigns.

The app designed to speed the reporting and processing of results was a bust. After a day's delay, the party rushed to release only partial results that overstated the size and durability of Buttigieg's delegate lead.

Some of the numbers were subsequently retracted and corrected. There have been allegations that caucus rules have been interpreted in contradictory ways in different locations. Now the head of the Democratic National Committee himself is calling for a review and re-tally of the numbers.

Every four years, politicians and pundits question why a small midwestern state unrepresentative of the nation as a whole is entrusted with the power and privilege of going first. While Iowans have successfully fought back against changes in the past, the knives are out in earnest. The quadrennial tradition of winter caucuses among the cornfields and barns could be coming to an end.

More in this category: « Trump acquitted by Senate in impeachment trial Mississippi fire: Mother and six children killed in house blaze »
Login to post comments
back to top